Padma Lakshmi is an Indian-born cookbook author who has been a professional model and long-time host of the reality show Top Chef. The show enters its twelfth season in Boston with a whole new round of cheftestants. Along with Lakshmi, will be judges Gail Simmons, Tom Colicchio and new judge Richard Blais, who is a former contestant from the series.

In 1984, when Lakshmi was 14 years old, she was hospitalized for two weeks and eventually was diagnosed with Stevens-Johnson Syndrome. This disease is caused by hypersensitivity to an infection or certain kinds of medications and its definition is:

A life-threatening skin condition, in which cell death causes the epidermis to separate from the dermis. The syndrome is thought to be a hypersensitivity complex that affects the skin and the mucous membranes.

Two days Lakshmi left the hospital, she was in a car accident in Malibu, California, which caused an injury to her right arm that required surgery. The surgery left a 7-inch scar between her elbow and shoulder. Lakshmi also suffered a fractured right hip and a shattered upper right arm.

Page Six was the first news source to report that Richard Gere and Lakshmi were dating in April 2014. The two were supposedly keeping their relationship quiet because Gere is currently divorcing his wife of 11 years, Carey Lowell.

E! News reported yesterday that the couple have called it quits, deciding that friendship would be a better route for them. 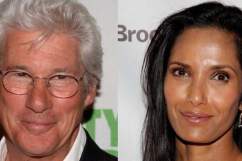 Ha! I look like a statue of myself! “Midnight's Father – A portrait from a photocall at @edbookfest earlier today. http://t.co/KSxbXJollI”

Lakshmi, was married to author Salman Rushdie for three years until they got divorced in 2007. Salman Rushdie’s book Joseph Anton: A Memoir didn’t paint the best picture of his relationship with Lakshmi. The Eater reveals some harsh things that Rushdie had to say about Lakshmi in his book:

The memoir tracks Rushdie leaving his wife for “an American of Indian origin who had grand ambitions and secret plans that had nothing to do with the fulfillment of his deepest needs.” The book goes into detail about their tumultuous relationship; he is at times harsh in his language when writing about her, citing her “frequent moodiness” that was “unpredictable and extreme,” her “capacity for brattish ‘model behavior,'” and her “majestic narcissism.” He also talks about her ending up on the cover of the French Playboy back in 2000 and how she had to hire a French lawyer because “she wanted to be paid for it.” … Rushdie, who reveals Padma’s original name as Padmalakshmi Vaidyanathan, wrote in his journal that “selfishness is her most prominent characteristic.”

4. Her Daughter Is Krishna Thea Lakshmi-Dell

Lakshmi has a very young daughter, Krishna Thea Lakshmi-Dell, whom she had with an ex, Adam Dell. Dell is the venture capitalist brother of computer mogul Michael Dell. At first, Dell was not identified as the father. In January 2011, Dell actually sued Lakshmi for sole custody of their daughter, but Lakshimi put up a fight, like any mother would. They settled out of court over a year later, with Dell being granted increased custody and visitation rights. In addition, their daughter’s full name was changed to Krishna Thea Lakshmi-Dell.

Krishna was Lakshmi’s miracle baby after years of struggling with endometriosis.

Lakshmi dated billionaire Teddy Forstmann until he died of brain cancer in 2011 at age 71. Reportedly, girlfriend Padma Lakshmi was by Forstmann’s side when he passed away. Forstmann was the Princess Diana’s ex-financier and left a trust fund for Lakshmi’s daughter.

As for Forstmann’s links to Princess Diana, Wikipedia reports:

In December 2006, newspaper reports on the inquiry into the death of Diana, Princess of Wales alleged that U.S. intelligence agencies had bugged Forstmann’s phone or plane and monitored his relationship with Diana. She and her sons were said to have planned to visit him in summer 1997, but British security reportedly blocked the visit over security concerns related to the bugging. 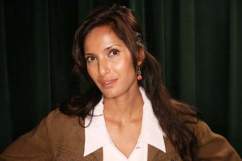 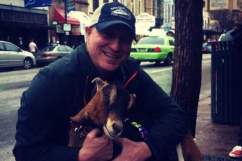