We have sad news for 5 Seconds of Summer fans. Unfortunately, 5SOS had to cancel their appearance at the 2014 Radio 1 Teen Awards because band-mate Ashton Irwin was admitted to the hospital for appendicitis. BBC Radio 1’s statement on the cancellation reads:

We’re really sorry for all the 5SOS fans who were looking forward to seeing the band perform live. Radio 1 wish Ashton a speedy recovery and we look forward to seeing him and his drumming faces back in the UK asap. The band had this to say: ‘We are so sorry to everyone that had planned on seeing us at Wembley, we were so excited to come see you all. We can’t wait to get back to the UK soon.’

They’ll be back in the UK for the Rock Out With Your Socks Out arena tour next year – but before that the Teen Awards faithful will get a taster of the amazing 5SOS live experience.

Irwin’s illness has prompted a variety of hashtags on Twitter, wishing the star well. And, in response to the cancellation, Irwin has posted a few tweets to his fans:

I miss playing shows already, I freaking love it

Sup guys! I'm so sorry too anyone I've let down, I promise we will make it up too ya! I'll be better soon, thanks for all the love xx 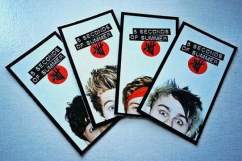 5 Seconds of Summer, 5SOS: 5 Fast Facts You Need to Know

Read More
5 Seconds Of Summer, Celebrities
Ashton Irwin of 5 Seconds of Summer has suffered appendicitis, prompting the 5SOS guys to cancel their performance at the 2014 BBC Radio 1 Teen Awards.