Robert Herjavec has a true rags to riches story, starting as an immigrant in Canada and now owning one of the largest companies there.

Read on to learn about the Shark Tank investor’s success in his business ventures and personal life.

1. He Immigrated to Canada

With his parents, he fled Zbjeg, Croatia (the former Yugoslavia), and immigrated to Halifax, Canada, at the age of 8.

In an interview with Business News Daily, he said, “I am not even a first-generation immigrant, I am a guy off the boat. My dad escaped from jail in a communist country and grabbed my mom and me and we came to Halifax when I was 8 years old. We landed with literally one suitcase.”

He’s married to Diane Pelse, a Croatian optometrist who he met when he went for an eye appointment. In the video below, they are interviewed for Montreal Home.

Their lavish house, in Canada, is featured.

There was a time in his life when he was a stay-at-home dad to his three children. 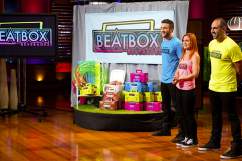 3. He’s the Nice One on Shark Tank

Along with Kevin O’Leary, Herjavec started on the Canadian version of the show, Dragons’ Den.

He told Business Insider why the show is so successful:

It’s the American Dream. It’s the desire to better one’s position in life, and who doesn’t have that desire? I think when people watch the show, they always think, ‘That could be me,’ and it really could. I mean, anybody can get on our show. Mind you, we’ve had 145,000 people apply this year, and 230 got on. But it’s the only show where you don’t have to have god-given talent in order to be successful. You don’t have to have a voice, and you don’t have to be able to dance. You can come on with an idea, and get an investment, and become very wealthy.

Another positive part of the show is that is changing the way small businesses are perceived.

He told ABC, ” I think Shark Tank is making business cool in our own small way – and of course, as a boring old computer guy, I am appreciative that my name and cool would ever be used in the same sentence.”

“Everybody has a passion for something – mine is cars,” he told MSN Autos.

He even owns a Ferrari race team. In an interview with PRN, he talked about his wish list:

I always have a list in my mind, this rotating list – a top ten. I probably have five of the ten cars that I want, but I’m very fluid with it because I realize that once I get them there’ll probably be something else I want.

As the CEO of the Ontario-based The Herjavec Group, he began with only three employees.