Teen Wolf Star Tyler Posey and his long-time love Seana Gorlick have split and he’s reportedly pretty “broken up” about it. The two were set to get married this Fall 2014, but there were rumors their wedding was postponed. Unfortunately, there was no postponement of the wedding … It was a break up. The news is quite sad for the star as he’s been with Gorlick for well over a decade and popped the big question to her just last year. Read on for the facts on the split and the couple’s relationship.

1. Posey Revealed the News at the ASPCA Cocktail Event in Honor of Kaley Cuoco-Sweeting and Nikki Reed

Scotch on the rocks? No with ice. I'm new to this scotch thing.

At the ASPCA Cocktail Event in honor of Kaley Cuoco-Sweeting and Nikki Reed in Bel-Air, Posey opened up to the media about his break up with long-time love Seana Gorlick. He said he’s doing okay, but he’s not sure if he’s still friends with his ex or not. Posey stated to Us Weekly:

Gorlick’s Twitter profile photo is still a loving pic of herself and Posey.

ASPCA event last night. W my homies and my gal. @swaltersashby @tylergposey @iamjrbourne They told us not to wave! pic.twitter.com/441Ddm9H5w

2. The Couple Got Engaged on Vacation in Hawaii in 2013

I got me a hot biker chick

Posey popped the question to Gorlick on vacation in Hawaii in 2013 and revealed to Us Weekly at the time:

I was so damn nervous. I just asked her and it was the coolest thing in the world. Her reaction was the sweetest — I can’t even explain.

We went to Hawaii for twelve days, and we’d never been there before. I had the ring on me, but I didn’t know if I was going to do it — I didn’t have a plan or anything. It was the first night there, we were just hanging out before dinner talking for like an hour, just like, she’s my best friend. And I had it hidden in this drawer and I pulled it out one time, and I was so damn nervous I couldn’t even smell anything. And I just asked her, and it was the coolest thing in the world. Her reactions was the sweetest — I can’t even explain it. It was the best thing in the world!

When Posey popped the question, he had said he’d been wanting to marry Gorlick for years.

3. They’ve Been Dating Since They Were 11 Years Old

Still winding down from last night. So thankful to have my woman there to support me I love her with all my butt!

Posey admitted he’s been in love with Gorlick since he was 12 years old and the two have been dating for over a decade, since Posey was 11 years old. Perhaps they got together at too young of an age.

4. Gorlick Is a Professional Makeup Artist Who Often Worked on the Teen Wolf Cast

My first and only #WCW goes to this beauty ?

Gorlick is a professional makeup artist who has worked on her now ex Posey, additional celebrities and Teen Wolf cast members including Holland Roden, Dylan Sprayberry, Dylan O’Brien, and Shelley Hennig. With their relationship over and Posey’s uncertainty about their friendship, it doesn’t sound like Gorlick will be working on the Teen Wolf set any time soon.

5. The Couple Have Three Dogs Together

Rox, Jack and Sadie are the three loves of Tyler Posey and Seana Gorlick’s lives. We hope Posey doesn’t have to be away from his beloved pups. Have a look at some of the cute photos and videos of their pups.

I love these people @wackytivities 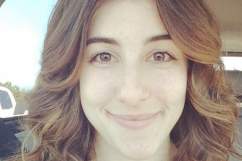