Nastassia (Stassi) Schroeder is the Queen Bee of reality show Vanderpump Rules and she’s returned for season 3, though she stated at last season’s reunion that she would not be back. Bravo TV reports:

The last anyone heard from Stassi, she’d found a new boyfriend, quit her job at SUR and moved to New York City to pursue a career in fashion. But now Stassi has followed her boyfriend back to Los Angeles and she’s disgusted to discover that nothing has changed with her former friends. She wants everyone to believe she’s matured, but no one’s buying this new persona and even her very best friendships are put to the test.

Viewers live and die for Stassi. She’s the bitch you want to hate, but at the same time, you love her and can’t stop watching the show to see what Stassi will say next. Over the last two seasons, we watched as Stassi dealt with her lying, cheating ex-boyfriend Jax Taylor and came out even stronger than she went into the relationship. On the first season of the show, her friends sided with Jax as he lied to them to cover up his actions. In the end, he admitted his sins, cheating on Stassi, and she had her friends back. Last season, Stassi was back and forth on how she felt about Jax, though she was more back than forth. Jax was hopeful that he would win Stassi back and even got a tattoo of her name, but Stassi chose to move on. Read on for the details on Stassi …

Patrick Meagher is the Sirius radio host of shows “The Wrap” and “Cocktails With Patrick.” He’s also the boyfriend of Stassi, who she’s head over heels for. The two met after Stassi reached out to him on Twitter and from there, the two carried on a long-distance relationship until Stassi moved to New York City to be with Patrick. Stassi and Patrick later decided to move to Los Angeles because of business opportunities and more spacial living. For all the info on Patrick Meagher, check out the below link. 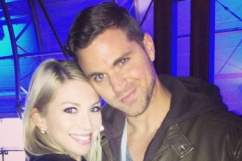 2. It Was Rumored that Stassi Was Pregnant

Showed up to film Good Day LA as my true self. #angel

There were reports going around that Stassi was pregnant recently, but the rumors are false. Stassi’s response to the rumors when being interviewed by She Knows:

I’m not pregnant. I might have gained a little weight, so it looks like I’m just a little fuller. But I’m just happy and healthy right now.

Another rumor was that Stassi is getting her own spin-off show. Stassi chose not to comment on this one, which leads us to believe it may be in the works.

3. The Amazing Race Was Her First Appearance on Reality TV

Vanderpump Rules isn’t Stassi’s first time on reality TV as she appeared on The Amazing Race in 2005. Stassi came in seventh place in the competition. Oh, and she had black hair. Perhaps Stassi got into reality TV because she has always had a passion for acting and the spotlight, having been acting since age 11.

4. Her Childhood Home Was Destroyed in Hurricane Katrina

Ahhhh this necklace is everything. Tassels tassels! @shopprimadonna

Stassi is from New Orleans, where her father Mark Schroeder works as an architect. Celebrity Net Worth reports:

Her childhood home was destroyed by Hurricane Katrina during which time the family had to move in with another family for several months.

5. Stassi Has a Jewelry Line Coming Out This Month

Stassi has always had her hand in fashion between her blog and fashion columns and now she has a jewelry line. She’s reportedly worth an estimated $30,000 and is trying to make a name for herself in the jewelry industry. Stassi’s fashion blog is called StylebyStassi and her mother Dayna is helping with the designing of the jewelry, which has been selling on Etsy.com under the name “georgijules”.

For more information on the rest of the cast members and spoilers from the new season, check out the below link:

And for even more information on Stassi and her relationship with her boyfriend, check out the below articles: