John Legend was the singer of “America The Beautiful” at the 2015 Super Bowl game and he has been gearing up for the performance all week. Over the weekend, he attended the NFL honors with wife Chrissy Teigen, Kanye West, and Kim Kardashian, spending time in the Arizona area. Tonight, Legend is joined on the field by several talented performers with Idina Menzel singing The National Anthem and Katy Perry as the headliner for the halftime show.

Prior to the National Anthem, Legend beautifully sang while playing a black Yamaha piano, surrounded by girls dressed in royal blue, holding flags. The camera cut to scenes across the country from Seattle to Boston and it was a very peaceful performance. 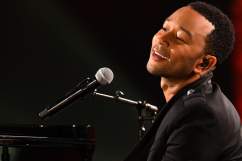