The Amy Poehler led NBC comedy Parks And Recreation ends tonight with not only the end of season 7, but also the series.

Fans have taken to Twitter to voice their sadness about the end of such a great show that has shot many of its ensemble cast straight to the top, including the now Hollywood A-lister Chris Pratt.

Also, what show is taking up the Feminist awesome? What will we do without Leslie? @parksandrecnbc https://t.co/UCOeNN0fnX Via @evilhag

And if you’re wondering how to watch the show tonight, you can watch it on your television on NBC at 10 PM EST. But unfortunately there’s no free live stream of the show. But if you don’t have access to a television, you’re not entirely out of luck, either, so as long as you have a cable provider.

To watch NBC live and the series finale of Parks and Rec in real time, click here. When you’re on that website, simply click your cable provider and provide the information.

Enter all that and you should be set. If you’re looking for the app for smartphone or tablet to livestream it, NBC doesn’t currently offer live streaming abilities on either with their app. 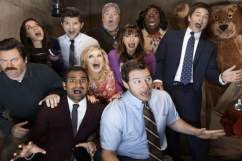