Norman and Norma have returned for a 3rd season of Bates Motel and the premiere kicks off another highly suspenseful string of episodes. We’ve gathered all the spoilers we could find to get you read for another roller-coaster ride in White Pine Bay, so let’s kick things off with the official synopsis of the season:

After a blissful summer of closeness with his mother, living within the safe confines of home and the Bates Motel, Norman’s fears about what really happened with Blaire Watson resurface and Norma questions what really happened. Forced to look at the truths about Norman for the first time, their deeply intricate relationship continues to evolve. Norma finds herself turning to the other man in her life, Norman’s half-brother, Dylan (Max Thieriot) and begins to rely on him in ways that she never expected. This relationship inevitably triggers jealousy in Norman and a new kind of love triangle between Norma and her two sons erupts. Estranged brother and uncle, Caleb (Kenny Johnson) returns to haunt the family throughout the season challenging the family bond even further. After a summer of living at the Bates Motel, Sheriff Romero (Nestor Carbonell) and Norma have grown closer but there will always have that troubling question mark surrounding Norman. Something doesn’t feel right, but spite of his instincts, Romero finds himself continually drawn back to the Bates family — and to Norma. Emma (Olivia Cooke) also determined to find out what is happening to Norman becomes more emboldened, fearless, goes after the things she wants.

On the premiere of the season, we get to meet one of the new faces on the show this season, but does she already become a victim of Norman’s on the very first episode? The new cast members on the show this season include Kevin Rahm, Tracy Spiradakos, and Ryan Hurst from Sons of Anarchy. Bradley, played by Nicola Peltz, also returns to surprise the family.

In an interview with Tracy Spiradakos, she tells us about her character Annika, who is a prostitute, and says that she’s staying at the motel to pursue an opportunity and everything unfolds from there. Norman becomes a bit infatuated with her, but also has asked Emma to become his girlfriend, so there’s a bit of an issue there as well. As far as the overall theme of the third season goes, Spiradakos says that:

We dig deeper into the trenches of what’s happening to Norman, more so now than before. From what I’ve seen, it’s getting more into his psyche and what’s going on inside of him.

He feels like he’s a puzzle with missing pieces and that he knows sometimes things happen and he doesn’t understand why they happen. I think that is pretty scary to him. Over the season there is a growing awareness of darker parts of himself.

Freddie Highmore also opened up about how Norman’s relationship with his mother is evolving, explaining:

There is this added pressure and added dynamic in the relationship in the third season that I think hinges on the fact that they are so close and that he loves her more than anything, including himself.

On the premiere episode, Norman’s brother Dylan feels it’s inappropriate that Norman sometimes sleeps in the bed with their mother and Norma begins to agree, though it’s difficult for her to let go. While we’re on the subject of Dylan, he wants to break away from the illegal drug dealing he’s been involved with. Upon telling this to Sheriff Romero, Romero tells him that if he makes this decision, he can no longer protect him. Nestor Carbonell, who plays Romero, tells EXTRA:

He has been drawn obviously to Norma and he sees a female counterpart in her. She is equally as stubborn as he is, equally as guarded, but also resolute in ways. I think in Norman he sees possibly a surrogate son who obviously needs some attention. I think in Dylan he sees perhaps a younger version of himself. This guy who is trying to do the right thing with the cards he’s been dealt. I think he is strangely drawn to all of them as the family he wished he could have had.

Are you ready to check in to #BatesMotel Season 3 on March 9th? @insidebates

This season, a stronger Norma is on board and Vera Farmiga, who plays Norma, revealed to us that:

You’re going to see a more unraveled Norma this year. You know, I mean there’s mammoth stress in dealing with Norman’s mental state, you know. It has a whopping physical and emotional torn toll on Norma the way it would on any parent of a quote unquote special needs child. And I think following the events of last season, Norma is more aware, she’s more circumspect, she’s more attentive to Norman’s fragility. I think you’re going to see her playing I think her cards really close to her chest in the beginning of the season but she’s got to reach out. I mean she’s – I think she’s at a point where yes, to answer your question, she’s protective of him as ever and determined to help him as best as she can. But she doesn’t always know how. And I think she’s going to start reaching out to others. And they’re going to I think that relationship evolves as they allow people in their lives.

The premiere episode is titled “A Death In The Family” and the synopsis reads: Norman and Emma make decisions regarding their future; Norma informs Norman of his boundaries; Dylan’s new start is complicated by an unexpected visit. Episode 2 this season is titled “The Arcanum Club” and the plot is: Norma and Norman focus on Annika’s disappearance; Norma learns the truth about the Arcanum Club; Caleb and Dylan meet a new neighbor.

Bates Motel: Boom Boom (Season 3) | A&EBates Motel is back, and things are getting a little crazy. Ain't it great? Watch a preview of the upcoming madness, and don't miss the season premiere Monday at 9/8c. Subscribe for more Bates Motel: aetv.us/subscribe_ae Love Bates Motel? Find more of what you love on our site: aetv.com/shows/ Watch full episodes here: aetv.us/BatesMotelOfficial Like…2015-03-03T22:44:04.000Z 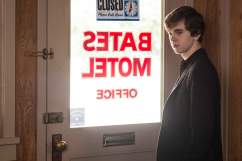 Read More
Bates Motel, Celebrities, TV
Check out all the spoilers for season 3 of Bates Motel, plus cast details and info on the 2015 premiere episode.