In tonight’s season finale of the Real Housewives of Beverly Hills, Brandi Glanville reveals that her father Guy is “dying in the hospital” as she tries to settle a feud with cast-mate Lisa Vanderpump. Glanville has a bit of a breakdown and tells Vanderpump that Yolanda Foster has been the only person to reach out to her about her father. She says that her father is a better man that Vanderpump and her husband combined.

In October 2014, Glanville’s father Guy was admitted to the hospital after battling a long illness and he was moved to the ICU unit. Glanville then tweeted: Dads going in for heart surgery- doctors say he looks amazing for how sick he is!! #praying. She then wrote: Last thing dad said before surgery is GIANTS must win!! So MOTHER F–KING GO GIANTS! #dontf–kitup. Guy Glanville has had a serious heart condition for years as Glanville wrote in her blog in 2013:

This year my dad came down with a very serious heart condition. He had heart surgery in the past, and his heart now seem to be relapsing to the point he would need surgery again. He couldn’t even walk across a room with getting out of breath. For my dad, who is a very active person, this was very depressing.

Mom giving dad a shave before his big facial! pic.twitter.com/puMofM5SPL

Over the years, Glanville has had her issues with her father as he hasn’t approved of some of her actions and Glanville’s mother has been a great mediator. Glanville talked about their ups and downs in her blog, writing:

My dad and I are a lot alike. We both have tempers and are very feisty. My dad overthinks everything — and I don’t think about things enough. He and I have always butted heads, but we usually resolved things right away … My book came out, and originally my dad loved it and was very proud. But once his health started to fail, we had an argument about my Oscar dress and stopped talking — and not just for a few days this time but for almost five months. I tried my hardest to make up with him to no avail, and I felt very alone. My dad is the only man in my life that I’ve always been able to count on and now he was gone. Luckily my father and I have slowly gotten our relationship back on track …

When Glanville was publicizing her first book, they seemed to mend fences a bit, with the assistance of Foster, who Glanville’s dad had a little crush on. Most recently, we saw Glanville’s parents speaking with Vanderpump at Brandi’s housewarming party about their daughter’s mouth and how it gets her in trouble, saying she doesn’t mean the harsh words she says.

Glanville has an older sister named Tricia, and a younger brother, Michael. And, as far as we know, Glanville’s father is still alive today. 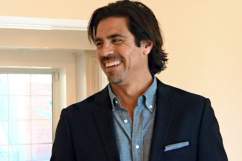