This is the woman who was originally rumored to have had Chris Brown’s baby. Model Nia Riley, 31, is a star on VH1’s Love & Hip-Hop as well as the daughter of Grammy-winning songwriter Teddy Riley, widely credited as the father of New Jack swing.

Brown and his babymama’s daughter is 9-months old, reports TMZ. The couple have known each other for quite awhile and are still on good terms but they’re not together. “Sources” told TMZ that Brown is “happy about being a father.” The site adds that it doesn’t look as if there is a “formal child support order in place.” Initial reports indicated that Riley was Chris Brown’s babymama, now it appears her name is Nia Gonzalez. 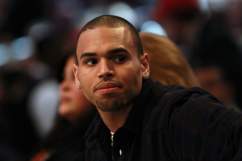 2. Riley Says She’s Too Short to Be a Runway Model

According to her VH1 profile, Riley has “graced the cover of several magazines.” It also says that since giving birth to her daughter, she’s eager to get back into modeling. Her baby was born in June 2013, making her too old to be Brown’s, if TMZ’s report that the baby is 9-months old is to be believed.

On her Explore Talent page, Riley says that she dreams of being an actress. She lists her hometown as Norfolk, Virginia. Riley writes, “I am very funny and easy to get along with person. I try to make a bad situation turn into the best possible.” According to her page, Riley is too short to be a runway model.

I want to wish my first baby girl special Happy Birthday. You're a big girl now & I'm so proud of you and your performance yesterday was superb. I know God is shining on you. Big things are coming your way. #rileygirls #likesforlikes #followforfollows #music #guy #blackstreet #rnb #oldschool #musician #musicvideo #nodiggity #fame #creative #repost #share

Her father, Teddy Riley, has worked with Usher, Michael Jackson and Whitney Houston. Added to that, in a 2010 interview he discussed working with Lady Gaga, Stevie Wonder and Elton John. He was previously a member of the 90s group Blackstreet.

4. Nia Riley & Her Daughter Were in a Car Accident in October

In October 2014, Nia and Kamryn were in a car accident. Her on-again-off-again boyfriend Soulja Boy posted on Instagram at the time of the crash, “My girlfriend @NiaRiley was in a car accident and that car flipped over and our daughter was in the car. Need your prayers. Life is short and you never know what could happen. I love them and don’t know what I would do if something happened to them. God first.” Both Nia and her daughter only suffered minor injuries in the crash. Interestingly, Nia refers to Kamryn as his daughter in the now-deleted post. In their report on the story, E! Online says that Riley and Soulja Boy have known each other since he was in high school.

5. She Had a Miscarriage in the Last Few Months

In a November 2014 episode of Love & Hip-Hop, Nia Riley had a miscarriage. That baby was Soulja Boy’s, according to Riley. In the episode, Riley learned she was pregnant and attempted to tell Soulja Boy, but she was unable to get time alone. Later in that episode, she revealed that she had miscarried. You can watch the two talk about the miscarriage here.