Besides his gig on Shark Tank, Robert Herjavec is using his go-getter attitude to advance on Dancing With the Stars, and maybe even secure a new girlfriend. Just as the show aired its 20th Season on March 16th, there were already rumors that he was dating his dance partner, Kym Johnson. Us Weekly reported that at the viewing party held that evening, they were cuddling and even kissing.

In the interview above, Johnson asks Herjavec what the other Sharks think of him being on the show. “They think I’m doing a good job and they’re incredibly jealous of my dance partner, including Barbara and Lori.” When Extra tackles the romance rumors, Herjavec says he’s dating DWTS judge Bruno and Johnson answered she’s with Len Goodman.

On March 23, TMZ released this video of the pair kissing, unaware there were cameras around. When the interviewer asked if it was all a publicity stunt, Herjavec said, “We’re great friends.” And when asked if they were dating, he answered, “We’re just having a great time dancing.”

Here they are in Week 3 of the competition dancing to “How Love Will I Love You” by Ellie Goulding. In the blog he writes for Entertainment Weekly about the show, Herjavec said, “Kym put together a stunning routine to Ellie Golding’s “How Long Will I Love You,” and the audience saw how moved I was in rehearsal—even Sharks can shed a few tears every now and then.” Speaking about Sharks, Lori and Kevin came to cheer him on that night.

On Monday, the pair paid tribute to Robert’s mother, who passed away in 2006 from Ovarian cancer. “Kym and I performed a tribute to my mom set to her favorite song, Engelbert Humperdinck’s “The Last Waltz.”…But it wasn’t until Kym played that particular song for me in rehearsal that the memories started flooding back,” he told EW.

In an interview he did with ABC, Herjavec did speak about Johnson, saying, “She’s a great dancer and she’s become a great friend. It’s more than just the dancing. I think we just get along great!” He also did admit that even if they were dating, he wouldn’t spill in the interview.

The pair also spent Easter together as evidenced by this picture Johnson shared on Instagram:

On Monday, the couple will pay homage to Mary Poppins for DWTS’ Disney Week. Johnson provided this sneak peek into their rehearsal. 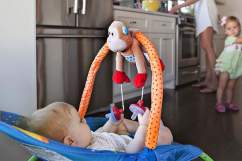 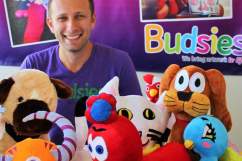