Thor heartthrob Chris Hemsworth leaves little to the imagination as he shows of his hammer in a trailer for the new comedy Vacation.

The 31-year-old, last year named People Magazine’s Sexiest Man Alive, proudly shows off his ripped physique – and an eye-catching bulge – in a promo for the flick released on Thursday.

He decides to take wife Debbie, played by Christina Applegate, and their kids on a trip to Walley World – an amusement park featured in the first film back in 1983.

Hemsworth’s character, the wealthy – and well endowed – Stone Crandall, is married to Rusty’s sister Audrey (Leslie Mann), with the family deciding to stay at the couple’s home for a night on route to the theme park.

Stone shows his guests around their room – while only in his boxers.

When he’s gone, Rusty jokes: “He totally just came in here to show off his six pack.”

The film hits theaters on July 29. 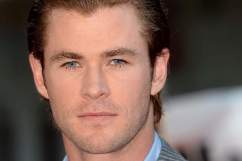