The celebrity gossip site says divorce papers have already been filed and the divorce will be made official on Monday.

“This is not the future we envisioned and it is with heavy heart that we move forward separately,” the couple said in a statement to The Tennessean. “We are real people, with real lives, with real family, friends and colleagues. Therefore, we kindly ask for privacy and compassion concerning this very personal matter.”

1. Shelton Filed for the Divorce

According to TMZ, Shelton filed for the divorce in his home state of Oklahoma. Shelton and Lambert had a prenup, so the financial aspects of the divorce were easily settled, TMZ reports.

Shelton, 39, will get their ranch in Oklahoma, while Lambert, 31, will hold onto their Nashville home.

Shelton and Lambert started dating in 2006. He proposed to her in 2010 and they were married on May 14, 2011, at a ceremony in Texas in front of 550 friends and family, including many celebrities. 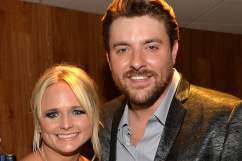 3. Rumors About a Possible Divorce Have Been Swirling for Months

Rumors of the couple’s possible split have been circulating since last Fall.

Shelton was previously married in 2003 to his longtime girlfriend, Kaynette Gern. They divorced in 2006.

5. Shelton & Lambert Fell in Love During a Duet & Often Performed Together

Shelton has said he and Lambert fell in love while they performed a duet together in 2005 (watch it above). They have often performed together since then.