On tonight’s episode of House of DVF, another girl was eliminated and it was Leigh Fidler. The winner of season 2 gets a position as a brand ambassador at esteemed fashion designer Diane von Furstenberg’s company and on the next episode, drama hits a new high, but let’s talk about what happened on tonight’s episode.

It was down to the final four girls and tensions were growing. The final four were Cat Wennekamp, Leigh Fidler, Alli Davis and Hanna Beth Merjos.

The episode opened up with candidate Chantal leaving the show. Then, Diane’s assistant Rachel called the girls in to meet with Diane and her associate Stefani for their mission. The girls must create a pop-up shop in Boston, with all the work on their shoulders, including drumming up publicity for the sample sale. Leigh and Alli take one car off to drum up attention while Hanna Beth and Cat take another car around Boston. While Leigh struggles with giving out fliers, Cat and Hanna Beth luck out. During their time together, Alli tells Leigh she’s too defensive while Cat and Hanna Beth level with their distaste for each other. Interestingly, they end up quite friendly.

The next day, the girls head to the store with only 4 hours to set up and realize the entire store is still in boxes. Meanwhile, Cat is running late, which leaves the girls a bit annoyed. As the sale begins, Cat starts to step over the other girls and even steals some of their sales. As a result, Cat gets sent back to New York while the three other girls remain in Boston. Cat does not get eliminated just yet, but the girls get to stay in Boston longer than she does. Once back in New York, the girls take part in a charity event that touches Diane’s heart as it reminds her of her late friend, designer Oscar de la Renta. At the event, the girls are being watched to see if they are able to show off their ability to charm others.

During the course of the evening, Diane’s associate Jessica thought she’d have to keep her eye on Cat, but realized it was Leigh who she felt was out of her league. As a result, Leigh ends up getting sent home by Diane. 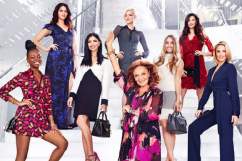 Read More
Fashion, Reality TV, TV
Who gets eliminated tonight on House Of DVF? Was it Cat Wennekamp, Leigh Fidler, Alli Davis or Hanna Beth Merjos? Read on for details and see who may win.