Scott Disick and his longtime love and baby mama Kourtney Kardashian have broken up. The couple shares three children together and Disick has had a rough past with partying. Ultimately, Disick’s lifestyle has caught up with him and he has unfortunately split from Kardashian. It’s been a sad time for the family. Recently, Disick has been photographed with model Lindsay Vrckovnik and she is said to be his new girlfriend. For all the facts on their relationship, read on.

Scott Disick may have caused some drama when he was photographed with ex and celebrity stylist Chloe Bartoli, but now he is reported to be dating an 18-year-old model named Lindsay Vrckovnik. 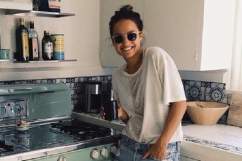 2. Vrckovnik Is Reported to Already Have a Boyfriend

According to Yahoo Celebrity, Scott and Lindsay have been spotted out and about together, but she’s been trying to keep their relationship under wraps because … Lindsay is reported to have a boyfriend.

3. The Two Have Been Traveling Together

Scott and Lindsay have been seen at the Setai Hotel, the Trump Soho Hotel, the Soho House and the nightclub 1OAK. These two have been photographed together in New York as well as Miami.

4. As News of Disick And Vrckovnik Is Released, Kourtney Kardashian Has Been Photographed Out With Justin Bieber

Justin Bieber is a good friend of the Kardashian family, so his being seen out with Kourtney Kardashian really shouldn’t be a big deal. Of course, however, the tabloids are making it look like there might be a little romance in the air for them. The two were spotted together in West Hollywood.

Lindsay Vrckovnik is a beautiful model and she’s signed with Canadian model agency Spot 6 Management. The agency has models working for designers including Dior, Chanel, Balenciaga, and many more.

Who Is Chloe Bartoli?