A new Star Wars international trailer has dropped, and it has tons of previously unseen footage. To think, we fools all thought we were done with The Force Awakens trailers until the movie arrived on December 18.

Turns out Disney decided to tease us some more with an international trailer that shows some Tie Fighters breaking through the atmosphere in what looks like an Apocalypse Now homage. We also get a nice glimpse of Princess Leia as well as the reveal that the character of Rey (Daisy Ridley) is waiting for her family.

The clip ends with the line “Hope is not lost today. It is found.”

Previously, Ridley said about her character, “She’s completely self-sufficient and does everything for herself, until she meets another character and an adventure begins.” 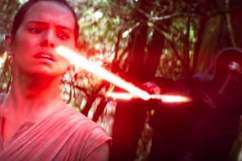