Diane is personally conflicted when she is forced to argue a heated case between pro-choice and pro-life advocates in order to retain an important client, represented by attorney Ethan Carver (Peter Gallagher). Also, Alicia and Lucca are desperate for new business and attempt to poach clients from Louis Canning (Michael J. Fox), on THE GOOD WIFE, Sunday, Nov. 22 (9:00-10:00 PM, ET/PT) on the CBS Television Network. Pictured Julianna Margulies as Alicia Florrick.”

Last week’s episode had a lot of awkward moments between several of the characters. Peter stays with Alicia while he’s in town and Alicia did not answer Eli’s calls to warn her he would be there. Things seem to have been heating up after Alicia asked Jason Crouse to sign insurance documents and feels bad and offers him a drink and mini tacos. During their flirtation, Peter and his team barge in and there is an immediately awkward introduction of Peter and Jason. Alicia did not inform Peter that she hired a P.I., especially not an attractive male who is over the family home. Regardless of meeting Alicia’s husband and presidential candidate Peter, later in the episode Jason tells Alicia he still wants mini tacos.

While Peter and Alicia are in the same home, they end up sleeping together and Eli walks in on them and is completely shocked. Eli should be happy that husband and wife are canoodling, because having them pretend to be a close married couple was his strategy to appease the press and portray a positive family appearance.

Courtney Paige has dinner with Alicia and Peter for their daughter Grace’s birthday, which they are celebrating very early. The dinner takes an awkward turn when Peter’s mother Jackie (Mary Beth Peil) who is with boyfriend Howard (Jerry Adler) push past Eli who tries to stop them, and join the dinner. Jackie doesn’t care that the dinner is to impress Courtney and get her to be a contributor to Peter’s campaign, she has news and wont keep it in. Jackie announces that her and Howard are getting married! Alicia encourages the conversation regardless of Peter being mortified. Despite the disaster of a dinner, Courtney decides to back Peter.

Alicia’s daughter Grace (Makenzie Vega) who has been posing as an assistant for Alicia’s new home law firm asks how she can help bring in more business. Alicia said she can cold call insurance and other companies and look at the ad size to tell how large the businesses are. Grace also asks for a percentage of new business and Alicia offers her half a percent, Grace wants a full percent but mom insists and they settle on half.

Jason Crouse (Jeffrey Dean Morgan) is also working part-time as an investigator for Diane, she offered him a job earlier in the season but it seemed like he declined to work for Alicia. Diane asks him why he wont work for her full-time and tells him he could make a lot more money. Jason says money isn’t everything, but does not tell her the real reason that he is also working for Diane’s rival Alicia. If the news gets out that he is working for both attorneys, it will definitely ruffle some feathers

Eli comes to Alicia with some new business, but Alicia immediately think he is there to give her a hard time about her disagreements with Frank Landau (Mike Pniewski), who she had made a previous deal with and recanted. Eli actually is there to offer her a case with Courtney Paige, in which she intends to increase the salary of all her employees to $75,000. Eli asks Alicia to talk her out of this because it could hurt Peter’s (Chris Noth) presidential campaign and is a very socialist move. 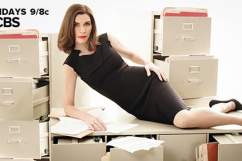