Stefan (Paul Wesley) and his brother Damon kidnap their mother Lily (Annie Wersching) to lecture her about her bad choices in men. (The CW)

The Vampire Diaries Season 7 Episode 7 is on tonight November 19, at 8:00 P.M. ET/PT on The CW, and is titled “Mommie Dearest.” Read on for a recap of Episode 6 and a sneak peak into Episode 7 with a synopsis, trailers and spoilers.

The official description of Episode 7 from The CW website reads:

SECRETS FROM THE PAST — In order to get through to Lily (guest star Annie Wersching) about Julian’s (guest star Todd Lasance) manipulating ways, Stefan (Paul Wesley) and Damon (Ian Somerhalder) confront their mother with painful memories from their childhood. However, when Lily reveals a dark secret she’s been harboring for over 160 years, Stefan and Damon are left questioning everything they’ve ever known about their family. Determined to prove himself to Lily, Enzo (Michael Malarkey) comes face-to-face with Julian and challenges him to a duel, but an unexpected twist threatens to complicate things. Elsewhere, Matt (Zach Roerig) finds himself in the middle of a deepening mystery involving the residents of Mystic Falls, and Caroline’s (Candice King) world is turned upside down when Valerie (guest star Elizabeth Blackmore) reveals some life-changing news to her. Kat Graham and Matt Davis also stars. Tony Solomons directed the episode written by Chad Fiveash & James Stoteraux.”

Things get ugly at Lily’s peaceful party to introduce her resurrected lover Julian to invited guests and family. Stefan wants to kill Julian immediately and Damon would like to wait until Lily is very attached to him to break her heart as much as possible when he is gone for good. Stefan knocks out Damon and tries to kill Julian, he misses with his wood stake attack but manages to push him into the fire, Lily is able to put the fire out and is furious with Stefan and Damon who has woken up and joined his brother. While they are all discussing the matter, Julian flips out and tries to kill Stefan and Damon, Lily intervenes and for once shows some serious compassion when being faced with losing her sons. Stefan finally tells Damon why he wants to kill Julian, Damon wants to punish Lily for taking away his love Elena, but Stefan wants revenge against Julian for killing his unborn child.

More heartbreak for Alaric when his newly resurrected friend in the body of his late wife starts dying. Jo’s human body cannot handle the soul of a vampire and starts to shut down. Alaric thanks her for being kind to him and letting him hear Jo’s voice again and say goodbye to his wife since he never had a chance when she was murdered at their wedding. In a bizarre turn of events, some hope is restored for Alaric. Valerie was watching Alaric and Jo’s wedding video, which Caroline thought very insensitive, but she recognized a spell that the Gemini Coven was chanting during the massacre. This chant was to protect Alaric and Jo’s unborn twins. Valerie did a locator spell for the twins with Alaric’s blood and it fell right at Caroline’s feet and burst into flames. This was very confusing to everyone until Valerie announced that the babies are inside of Caroline! There has never been a pregnant vampire, and this week’s episode will reveal if such a thing is possible.

Check Out The Vampire Diaries Season 7 Episode 7 Trailers Below

Damon and Stefan host Thanksgiving dinner and kidnap their Mother Lily and are planning their next attack on Julian. Lily tells them that she has linked her body to Julian’s and if he dies, she does as well. Since Lily was responsible for tormenting her sons, it seems they may take this as an opportunity to take out 2 birds with 1 stone. Caroline figures out that the room full of compelled humans at the High School are all there as a “human blood bank” for the purpose of giving enough blood to supply a Thanksgiving feast for the Heretics.

Enzo and Bonnie go to the impound to find dead Heretic Oscar’s car, because Enzo overheard that Julian was looking for it. Bonnie tells Enzo that he’s being too aggressive with trying to take down Julian just so he can have Lily to himself and that he should try “flowers, a quiet dinner, or listening.” They find Oscar’s car and realize it must be something inside that Julian is so desperate to get his hands on.

Executive Producers Caroline Dries and Julie Plec dive into the characters and events of the episode. Stefan and Damon kidnap Lily and try to get her onto their side by lecturing her about her terrible choices in men and constant tolerance for abuse. Their father used to abuse them and sent their mother away to die of consumption before she was turned into a vampire, and now Julian who also has a violent past and unpredictable temper. Lily does not seem to be taking their advice to heart. Caroline freaks out and proclaims that she is not pregnant with Alaric and Jo’s twins as Valerie informed her. Enzo and Julian go after each other to win Lily as their prize, Enzo actually challenges Julian to a duel involving swords. 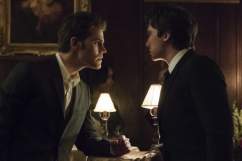