Celine Dion’s husband of 21 years lost his battle with cancer on January 14. Rene Angelil passed away at the age of 73. Like his wife, he was a native of Canada, born in Montreal in 1942 to a Syrian father and Lebanese mother. A statement given to People Magazine said that Angelil died in Las Vegas “after a long and courageous battle against cancer. The family requests that their privacy be respected at the moment; more details will be provided at a later time.”

1. He’s Survived by His 6 Children 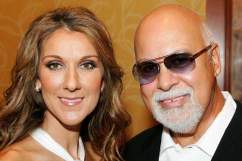 Rene Angelil & Celine Dion: Together Over the Years

2. His Health Was So Bad in 2015 That Dion Canceled Her Concerts

TMZ reports that Angelil was diagnosed with throat cancer in 1998. In 2015, his cancer was so bad that Dion took a break from her standing engagement at Caesars Palace in Las Vegas as well as canceling a tour in Asia. Following Angelil’s dead, Dion released a statement on Facebook saying, “It is with deep sadness that we announce that René Angélil, aged 73, died this morning at her residence in Las Vegas after a long and courageous fight against cancer. The family wishes to live the mourning in privacy. Other information you will be provided in the next few days.”

3. Dion First Met Angelil When She Was 12

The couple first met when Dion was 12 and he was 38. He was introduced to singer by her brother, Michel Dion. They began their relationship in 1987 and were engaged in 1991. Their wedding took place in Notre-Dame Basilica in Montreal in December 1994. They had their vows renewed in Vegas, where the couple lived, in January 2000.

Rene Angelil & Celine Dion: Together Over the Years

4. He Was an Avid Gambler, Allegedly Betting $1 Million Per Week

He was an avid hockey fan and good friend of former Colorado Avalanche president Pierre Lacroix. In addition, Angelil was a renowned poker player. The Observer reported in 2011 that he would regularly gamble $1 million a week at Caesar’s Palace, as well as the Bellagio. He also appeared at the World Series of Poker Tournament of Champions and the 2007 Mirage Poker Showdown. A source told the Observer, “Celine Dion’s husband is a big gambler. He probably gambles $1 million in a week, but he can afford to.” That quote was attributed to Jan Jones, former Las Vegas mayor.

5. He Was Accused of Rape in 2000 in What Turned Out to Be an Extortion Attempt

In 2000, he was accused of sexual assault by a woman named Yun Kyeong Kwon Sung. He paid her off but never admitted any wrongdoing. Sung and her husband, a pastor, were later convicted of extortion in relation to the incident in 2005. Angelil’s lawyer David Chesnoff said at the time, “Rene Angelil at the time was suffering from cancer, his wife was going through a difficult time, and he did whatever he could to make these people go away. Little did he know that they (Sung and Kwon) would try to extort him.” No charges were ever filed against Angelil.