The Young and the Restless returned on Monday with an all-new episode as Devon (Bryant James) caught Neil (Kristoff St. John) between the sheets with Hilary (Mishael Morgan) while Dr. Neville (Michae E. Knight) began treating Ashley (Eileen Davidson) for her illness.

Read on for Y&R’s Monday, January 11, 2016 recap and always keep it here for Y&R after-show updates. 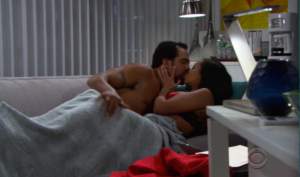 From top to bottom, Neil and Hilary getting intimate at the lab prior to Devon showing up. (CBS Screenshot)

Neil has gone above and beyond trying to steer clear of Hilary’s sexual advances. On multiple occasions, he’s insisted he wouldn’t step on Devon’s toes. Knowing himself and Hilary’s history — especially after she married Devon — he knows it’s best to stay away. To top if off, Neil even put Nikki (Melody Thomas Scott) in a happy New Year lip-lock to turn Hilary off.

On Monday, Neil recruits Nikki once again, wanting Hilary to see the two getting more intimate. Although Nikki is hesitant to continue the foolery, she obliges. Hilary approaches Nikki about her New Year’s kiss with Neil. Nikki tells Hilary that she saw her with Devon.

“I saw you with Devon when the clock struck twelve.”

Hilary tells Nikki that she noticed her with Neil.

On Monday, Neil informs Devon about his motives behind his plan to deter Hilary’s affection. Later, Neil texts Nikki to go to a suite while Hilary notices.

The plan falls through once Victor (Eric Braeden) gets word about it and confronts Nikki.

Hilary wants Neil’s assistance with a proposal to Jack (Peter Bergman). Neil is hesitant at first, but agrees when she says it’s about hope for Jack. Neil says they must hurry up.

At Newman Towers, Neil tells Hilary that the proposal is only 75% there. Neil says that she must dot her i’s and cross her t’s before bringing it to Jack. Hilary uses the same verbiage in a sexual way to lure Neil into kissing her and unzipping her dress. Later, Devon catches Neil fooling around with Hilary inside the lab.

Kevin (Greg Rikaart) daydreams of himself and Mariah (Camryn Grimes) toasting champagne to the future and playing fooseball. In the present, Kevin tells Victor that the man he wants to become says no to a Victor Newman offer. Kevin says he wants to stay loyal to Billy. Victor thinks it’s unreasonable for him to do that with a dying man. 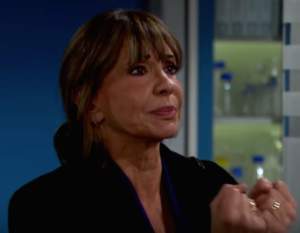 Jill (Jess Walton) — as are all the Abbotts — are having a difficult time dealing with Billy’s predicament. Evidently, the hospital surgery didn’t do much to improve his status. She finds Dr. Neville and requests his help.

“Please come to the hospital with me and heal my son.”

Dr. Neville — who wanted to use his non-invasive method on Billy (Burgess Jenkins) last week — now thinks the point is moot.

Later, Jill tells Devon about Billy’s condition; he apologizes. Jill asks him for his help in convincing Dr. Neville to work on Billy. Devon says that although he invested in him as a favor, he still hates Neville and has his doubts. Jill pleads with him to talk to the doctor, reasoning that Devon has Katherine’s (Jeanne Cooper) money and she’d want that.

Meanwhile, Ashley asks Neville to heal her; she trusts him. He says it’s her mission to get better and he will do everything he can to make it happen. He rubs her head. Dr. Neville tells Ashley — who’s in bed — to rest. He gets on the other side of the bed and a medical book as Ashley falls asleep.

Later, Jill tells Victoria (Amelia Heinle) about her plans to get Devon to speak to Neville. Victoria says the decision about what happens to Billy isn’t up to her; it’s Jack’s call.