Alisan Porter is a former child star who has grown up into a beautiful woman and now she’s a contestant on The Voice. Read on for the facts on Porter, her husband, her famous friends, and her battle with substance abuse.

1. She’s the Founder and CEO of the Blog Lil’ Mamas

"Life can only be understood backwards; but it must be lived forwards." Søren Kierkegaard

Porter is the founder and CEO of a blog called Lil’ Mamas, which you can check out by clicking here. What began as a closed Facebook group, grew into a full-blown company. Porter wrote in her mission statement:

So, I decided to create Lil’ Mamas the website, based on the Facebook group but a little more “legit.” Just like all things motherhood, I knew I couldn’t do it alone, so I asked Celia Behar to run it with me. Why Celia? Well, I’ve known her forever, she’s a mom of two, and she was my babysitter. And by that I mean – she babysat ME! … Plus, when I called her one day to ask her what I thought was a possible “too much information” mommy question days after giving birth – her response was “Ali, you’re a mom now. There’s no such thing as too much information. It’s all out on the table from here on out!” So true, right!?! So we took that concept and ran with it. We then asked several girlfriends to contribute along with some Mama Gurus and trained experts who got me and Celia through the most challenging “mom stuff.”

Porter prides herself on helping other mothers out there who may have questions and helping each other through the tough times with laughter. In addition, Porter is a contributor for for Movmnt Magazine.

2. Porter Has Been Sober For Eight Years

During Porter’s blind audition on The Voice, she reveals to the judges that she has been sober for eight years after struggling with addiction. Porter actually talked about her rocky past on her blog, stating:

Hi, I’m Ali, and I’m an alcoholic. Yup, bet you didn’t see that one coming. Or, because you know that I’m a former child star, you totally did. Anyway, it’s the truth. I’ve been sober since Oct 28th, 2007 and I haven’t touched a drink or a drug since … I was living in NYC when I realized I needed to get sober. I was miserable and overwhelmed with life. I was heartbroken and realizing that what had always worked for me in the past was NOT working at all. Not even a little bit.

I felt trapped, scared, and sad and I was ready to really go for broke or get better. So, I did what every good user does and I prayed to a god I had never believed in…and then called my mom. Days later I was off to treatment, just like that. For the next four years I went to meetings, worked the steps, got a sponsor, found a god of my own understanding, prayed, meditated and basically grew up. Growing pains were inevitable, I felt them often but I continued on the path because unlike my old ways, this way was working.

Today, Porter stated on The Voice that she believes the universe really had a plan for her.

3. Actress Jodie Sweetin Is a Good Friend of Hers

Today is dedicated to my friend and fellow #Mama @jodiesweetin. We have had a similar journey and met on the way back up. I am so proud of you Jods, for the work you have done and the woman that you are. I am so grateful to walk this road with you. I love you!!!!! I will now resort to my pajamas and my remote to binge watch #fullerhouse. #netflixandchill #comebackkids #Mamas

You may think that Sweetin and Porter met as child stars in Hollywood, but that is not the case. Porter posted the above Instagram pic of Sweetin with this as a caption:

Today is dedicated to my friend and fellow #Mama @jodiesweetin. We have had a similar journey and met on the way back up. I am so proud of you Jods, for the work you have done and the woman that you are. I am so grateful to walk this road with you. I love you!!!!! I will now resort to my pajamas and my remote to binge watch #fullerhouse. #netflixandchill #comebackkids #Mamas

Perhaps Porter is talking about Sweetin’s overcoming addiction or could it be about making her return to television. In our opinion it sounds like the two bonded over their sobriety. Whatever the case, both are sober and continue to succeed. Sweetin is currently starring on the Netflix series Fuller House.

Porter is also close with some other celebrities you may know. Check out the below Instagram pic of her with Adam Lambert.

Happy Birthday to my FIVE year old godson Riff and my co-godfather and soul brother @adamlambert. My world is infinitely better with you both in it. I love you!

4. Days of Our Lives Star Brian Autenrieth Is Porter’s Husband

On March 10, 2012, Porter married former Days of Our Lives actor Brian Autenrieth. The couple resides in California and have two children together – son Mason Blaise and daughter Aria Sage. Autenrieth now works as a fruit exporter.

Porter and her husband married at Diablo Dormido, a ranch in the Santa Monica mountains with about 100 guests. Porter talked about her hubby to People, stating:

We’ve been friends for 13 years and it’s the most incredible feeling to know you’re marrying your best friend.

Their first dance together at the wedding was to Frank Sinatra’s “The Second Time Around.” 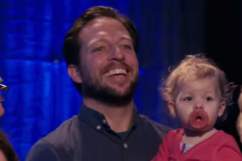 5. She Is Most Known for Her Role as ‘Curly Sue’

See the 'Curly Sue' actress all grown up and winning over the judges of @NBCTheVoice https://t.co/F1sa50O80J pic.twitter.com/qmjUBNzJp1

At 10 years old, Porter came out as the lead role in the movie Curly Sue

, opposite Jim Belushi, and that is the movie she is most known for. After the movie, she continued to act in high school and later moved to New York where she appeared on Broadway several times. She also formed a couple bands – The Raz and The Alisan Porter Project.

Though she spent a great deal of time acting, Porter told the coaches on The Voice that singing has always been her true passion, but she had put it aside to focus on being a mother.

Click here to check out Curly Sue on Amazon.com.