Kanye West’s new album “The Life of Pablo,” along with his recent bizarre behavior on Twitter, has created a major buzz on the Internet. While the album is available to listen to, you can only do it in one place, Tidal, the music streaming service owned by Jay Z.

Please to all my friends fans and music lovers. Sign up to Tidal now.

The delay in releasing the album through normal channels has caused many to illegally download it through torrent websites and elsewhere. According to Torrent Freak, more than 500,000 people have downloaded it illegally.

“The album is currently leading The Pirate Bay’s list of most shared music torrents by a landslide,” Torrent Freak says. “At the time of writing close to 10,000 people were sharing a copy of the most popular torrent simultaneously, something we haven’t seen with a music release before.”

But it is possible to get the album without doing it illegally. Here’s how you can legally listen and download “The Life of Pablo” for free:

Sign Up for Tidal & Begin a 30-Day Free Trial

While Kanye decides exactly how his album will be released going forward, you can start a free trial of Tidal and listen to “The Life of Pablo” now. Click here to choose a subscription plan at the Tidal website.

If you want to keep listening, the Premium plan costs $9.99 a month and the HiFi plan costs $19.99 a month. You could also pre-pay for six months and pay $8.49 and $16.99. Tidal also offers family plans, student plans and military plans.

According to Tidal, the music can be listened to on “TIDAL works on phones, tablets, computers and a wide range of network players such as Sonos, Bluesound, Linn, Auralic, Mirage, Squeezebox, Amarra, McIntosh, Wadia, Electrocompaniet, Meridian and Lode.

You can download the app through the Apple Store here and through Google Play here.

If you don’t want to stream “The Life of Pablo,” you can make it available to listen offline in the Tidal app, according to the streaming service’s website:

It’s easy to add albums and playlists for offline listening. Here’s how:

– Press the offline switch right below the playlist or album name

– You have now started the download of the tracks.

-Inversely, to remove a downloaded playlist used for offline, just turn the switch to the off position. This will free up storage space on your device.

You can watch a video tutorial here showing how to set an album to be available offline.

The offline music will not be available without a subscription. 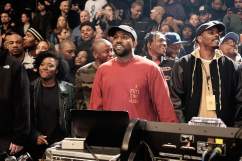 Read More
Breaking News, Kanye West, Music
Kanye West's new album "The Life of Pablo" is currently only available on the streaming music app Tidal. Here's how you can download and listen to it.