The Bold and the Beautiful returns on Monday with an all-new episode as Steffy (Jacqueline MacInnes Wood) talked up Wyatt (Darin Brooks) to Thomas (Pierson Fodé) while Liam (Scott Clifton) became a little more curious about his mystery surroundings.

Read on for B&B’s Monday, February 1, 2016 recap and scroll below to click on “Next Page” for an in-depth analysis on Liam’s predicament with Quinn.

Steffy Comes to Wyatt’s Defense Against Her Brother’s Doubts 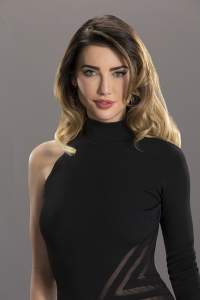 Steffy — while still holding a smidgen of hope for Liam — continues getting more smitten with Wyatt. (Screenshot)

At Forrester Creations, Steffy tells Wyatt (Darin Brooks) that she’s in early because of Liam’s resignation. Wyatt tells her he’s thinking about their day yesterday and he wants to check on Quinn, who’s back in the office. Later, Wyatt informs a nosey Quinn that he never kisses and tells. To her excitement, she realizes that he kissed Steffy. Quinn says she’s so much better off with him than Liam. Wyatt says that Liam has to be off his rocker for disappearing. Meanwhile, at Quinn’s cabin, Liam tries standing up and passes out again.

Steffy relives her kisses with Wyatt; she appears confused.Thomas shows up, and gets Steffy’s attention. don’t believe that Liam didn’t contact Steffy. She tells him that it may be time to move on. He asks her if she’s able to do that. Steffy acknowledges that she’s not over Liam, but someone else has showed her a way through the pain. Thomas says as long as it’s not a Spencer. To his disdain, Steffy admits it’s Wyatt. He says she should pick anyone but him; she shouldn’t be getting involved. Steffy says “too late.” Wyatt shows up and tries to prove his case to Thomas, who seems to partially let his resistance down.

Later, in Quinn’s office, Wyatt’s surprised to hear his mother say that Liam’s unpredictable. Wyatt says, “All he had to do was show up.” She reiterates that Wyatt must do whatever he can to secure his future with Steffy. He says that everything’s going at a good pace; one day at a time.

After arriving back at her cabin, Quinn notices Liam on the ground and helps him up. He wants to know why he’s so dizzy and can’t remember anything. She massages him, saying he needs rest. She says she won’t leave him. Liam says he’d like to stay there with Quinn until he gets better. He admits he doesn’t know where to go; he’s disconnected, but not from her. Liam holds her hand. He thanks her. Quinn says, “Trust me, you’ve thanked me enough.” Quinn says no one’s ever touched her like that before. She’s appears weirded out and confused.

Wyatt tells Steffy that while he’s aware shes not fully over Liam, it would be his mission to her happy if she wanted that. Unlike Liam, he’d never try to change her. Wyatt tells her that it was terrible for Liam to break up with her through text.