Andrew Farrell, a 19-year-old airport janitor with disabilities, was mocked by Curtis “50 Cent” Jackson in a video posted to the rapper’s Instagram account.

The video has backfired on 50 Cent, who has now faced outrage on social media. The video was posted to Instagram on Sunday after the interaction between 50 Cent and Farrell at the Cincinnati/Northern Kentucky International Airport.

“He doesn’t talk to people very often. He’s got a social anxiety disorder. He also has a hearing impairment,” Amanda Kramer, Farrell’s mother, told Cincinnati.com. “Why would you attack my kid like that? It doesn’t say much about his character when he has to attack a kid he doesn’t even know.”

50 Cent had been in Cincinnati to promote his vodka brand, Effen Vodka, and used the hashtag #EFFENVODKA in the Instagram video post.

1. 50 Cent Harassed Farrell as They Walked Through the Airport, Accusing Him of Being High on Drugs

The video, posted and recorded Sunday, shows 50 Cent walking through the airport talking to the camera and to Andrew Farrell. You can watch it above.

Throughout the video, Farrell shakes his head, not responding to 50 Cent’s questions.

“Listen, the new generation is crazy, they’re crazy,” 50 Cent says to the camera before showing Farrell.

“What’s your name? Look at him. What kind of sh*t you think he took before he got to work today?,” 50 Cent asks, as Farrell pushes his cart silently. “He high as a motherf**ker right here in the airport. Pupils dilated and everything…”

2. Farrell’s Classmate Saw the Video & Defended Him on Instagram

After the video was posted to Instagram, Farrell was identified, and defended, in a post by his classmate, who goes by @rusty_stone9.

“I went to school with him. His name is Andrew Farrell. He has extreme social difficulties just to let you know,” the classmate wrote. “He has a hard enough time getting through life without jackasses like you making fun of him. I hope you feel good about yourself. You just lost a huge fan.”

3. Farrell Says He Had Just Started Work & Was Minding His Own Business When 50 Cent Approached Him

Andrew Farrell told Cincinnati.com that he was just trying to focus on work when 50 Cent and a group of people approached him. He said the rapper than got “all up in my face” with his phone.

“I was just starting work,” Farrell told the news site. “Pushing my cart, minding my own business.”

His mother says 50 Cent might have been angry that Farrell didn’t recognize the rapper.

“Personally, I think the guy was mad. Andrew didn’t know who he was right away and he ignored him and he did his job and went about his business. I think he was mad and offended that someone didn’t flock to him,” she told Local 12.

Farrell’s family said it was painful to watch the video.

“It hurts to watch that, it’s painful,” his stepfather, Ken, told Local 12. “You come up and you start talking to a kid you know nothing about. That’s not fair. That’s a slap in the face.”

Farrell graduated from Conner High School in Hebron, Kentucky, last year, and then found the job at the airport. His family says they are proud of him.

“I want people to know that he’s a good kid. He doesn’t get in trouble. He’s not a drug addict.” Amanda Kramer told Cincinnati.com. “I want him to apologize to him more than anything and say that he was wrong. He should not have made those snap judgments. I’m tempted to contact a lawyer, but I don’t have the resources to do that. Sometimes it’s hard to fight a celebrity.”

She added that “all this kind of bullying that people are doing on the Internet, whether you’re a celebrity or not, it’s got to stop. It hurts people, and it takes a long time to recover from those kinds of things.”

His stepfather told Cincinnati.com, “The silver lining is that people are standing up for each nowadays and understanding that you don’t know the person, you shouldn’t be telling stories.”

50 Cent deleted the video from his Instagram page after the negative reaction.

He apologized on Tuesday, telling the New York Post’s Page Six in a statement, “While the incident at the airport resulted from an unfortunate misunderstanding, I am truly sorry for offending the young man. It was certainly not my intent to insult him or the disability community, which is a source of great strength in America. I have apologized personally to him and his family.”

In addition to the backlash on social media, 50 Cent is also now facing calls from people in the Cincinnati area for a boycott of his vodka brand, which he had been in town to promote before the airport interaction with Farrell.

The Holy Grail Tavern and Grill at The Banks announced on Facebook Tuesday, “In response to 50 Cent berating of a man with Autism We will be boycotting Effen Vodka and would hope that all other restaraunts in Cincy will join us !!” 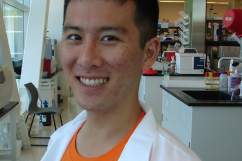