Anton Yelchin, 27, is an actor many of us know from Alpha Dog and Star Trek. Sadly, Yelchin has lost his life in a freak accident at his home where he got pinned in between his car and a mailbox. TMZ reported the unfortunate news.

Who has Yelchin left behind in the wake of his unexpected passing? His parents Irina and Viktor Yelchin were celebrities in their homeland of Russia as figure skaters and ballet dancers. Unfortunately, Yelchin was the couple’s only child and he leaves behind an estimated net worth of $10 million.

As for his love life, Yelchin’s last reported relationship was with actress Imogen Poots and Famous Fix reports the two having started dating in 2011. We have not seen reports of the actors themselves, confirming the relationship. Both Poots and Yelchin starred in two movies together – Green Room (2015) and Fright Night (2011). Check out a double interview with Poots and Yelchin from 2011 in the below video.

According to WhosDatedWho, Yelchin had a flirtation going on as a kid with former co-star Mika Boorem in 1996. That would have made Yelchin about 7 years old. See a grown-up photo of Boorem below.

The only other person that Yelchin has been rumored to have dated is model Alexandra Burman, who also happens to be Adam Levine’s ex. Below is an Instagram shot of one of Burman’s modeling pics.

Currently, there are no reports of an official dating relationship and there have also been rumors that Yelchin was gay. According to VipFAQ, 81% of the site’s voters on their Anton Yelchin page believed him to be homosexual. There is no record of the actor confirming his sexuality.

Whatever the case, the world has lost Yelchin far too soon and he was a truly great actor.

Kim Kardashian, socialite Paris Hilton and actor Anton Yelchin attend the after party following the premiere of Universal Pictures' "Alpha Dog" at the Cinerama Dome on January 3, 2007 in Hollywood, California. Check out Kardashian before she became a reality TV mogul. (Photo by Stephen Shugerman/Getty Images) 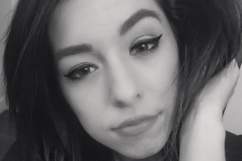 Did Christina Grimmie Pass Away?

Read More
Celebrities, Deaths
Young actor Anton Yelchin has passed away suddenly. Who was he dating when he died? Did he have a girlfriend?