Barker’s various projects and endeavors have made him millions of dollars. (Getty)

One of the most successful pop punk bands of all time, Blink-182, returns today with a brand new album, California. It’s the band’s 7th album, their last album being released 5 years ago. With the singles already succeeding on Billboard charts, the album is looking to be yet another hit in a series of successful albums and singles from a band that, after all these years, remains one of the biggest rock acts around.

That kind of stature in the music industry has made the band members quite a lot of money. Travis Barker was not always the band’s drummer, but at this point he’s been with them long enough to have made a fortune off the band’s success. In addition, he has plenty of other projects, music and otherwise, that have added onto that. It begs the question: how much money has Travis Barker made, and what is his net worth?

1. His Net Worth is Approximately $45 Million, Though Some Sites Say $85 Million

When it comes to the actual, tangible number for Barker’s net worth, sources vary in number a little bit. The most often used site, Celebrity Net Worth, estimates that Barker’s many successful projects have given him a net worth of about $45 million.

Despite their claim, many other sites put Barker at an $85 million net worth. This number most likely comes from a Celebrity Net Worth article that discusses the richest drummers. Barker is listed at 20th – behind Tre Cool at $45 million and after Danny Carey at $40 million. Despite this, the number in the article says $85 million. Knowing that CNW’s page for Barker claims $45 million, it’s very possible that the article contained a misprint.

2. Blink-182 Has Sold Over 35 Million Albums Worldwide, Almost All of Which Was After Barker Joined

Barker joined Blink-182 after they released Dude Ranch in 1997. Their first album with Barker, 1999’s Enema of the State, was the album that made the band a household name. As such, Barker was in the band when they were selling the most albums and making the most money. In total, Blink-182 has sold over 13 million albums in America alone. Worldwide, that number grows to an astonishing 35 million albums, according to the Los Angeles Times.

The first album Barker drummed on for Blink-182, Enema of the State, is also their highest selling album, being certified 5x platinum and selling over 5 million records. 2001’s Take Off Your Pants and Jacket also went multi-platinum, while 2003’s self-titled went platinum. In addition, several singles that Barker played on were certified gold.

3. He Has Drummed for Other Successful Bands, Including The Transplants

Barker’s incredible drumming ability has rarely been limited simply to Blink-182 songs. Barker has drummed for a number of bands, before Blink, during Blink, and during Blink’s hiatus. Barker met the Blink-182 guys while touring with them at Sno-Core 98. He was drumming for California ska-punk band The Aquabats. He has also been in his Blink-182 bandmates’ side projects, such as Tom DeLonge’s Boxcar Racer or Mark Hoppus’s +44.

Barker’s credits are impressively extensive. In addition to his many bands, he’s drummed on tracks for Run the Jewels, Britney Spears, Jennifer Lopez, Avril Lavigne, and The Black Eyed Peas. It’s an impressive resume.

One of his more successful ventures in music was when he joined The Transplants, a band formed by Tim Armstrong of Rancid. The Transplants had a number of successful singles in the UK and decent success in the US. Most notably, their hit single Diamonds and Guns found a second life in the early and mid 2000s when it was used in a series of commercials for Garnier Fructis, a cosmetics brand.

4. Barker Has Also Had Success in the Clothing Industry and the Television Industry

Barker and his wife at the time, Shanna Moakler, on MTV. (Getty)

Music is Barker’s passion, but it’s not all he’s known for. In 1999, he created Famous Stars and Straps, a company that creates and sells apparel and accessories. Buoyed by a recognizable logo featuring a large F and star, the brand became successful within the rock scene. According to the About Us page of Famous Stars and Straps’ website, Barker is still creative director of the company, and “maintains sole ownership to this day.” The site also touts the brand’s “grassroots style endorsements of nearly every sport, art, and charity that’s come across our desks.”

In the mid-2000s, Barker also dabbled in reality television. Barker took part in the MTV series Meet the Barkers, a show about Barker and his family. That family was his wife at the time – Shanna Moakler, a former Miss USA, and their three children. The series lasted two seasons, ending in 2006.

5. He Is Twice Divorced and Reportedly Paying $18,000 in Child Support

Barker drumming with his children at a 2011 Yo Gabba Gabba Live! show. (Getty)

Moakler and Barker got divorced ultimately, but it wasn’t Barker’s first – in 2002, he and his first wife, Melissa Kennedy, were divorced. Described as a toxic and dysfunctional pairing, the two separated in 2006 and were divorced in 2008.

In 2016, Barker filed documents to request a change to his child custody arrangement. His claims are that he’s paying $18,000 in child support, and he believes Moakler is spending most of it on herself. He also says it’s too high a payment for him, having earned less than $600,000 last year. Barker also alleges that Moakler has drugs and guns in the house when the children are there. 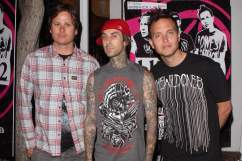