Thomas D’Agostino Jr., aka Tom, is the fiance of Luann De Lesseps and he was introduced to Real Housewives viewers on this past season of RHONY. De Lesseps said on Access Hollywood Live that Tom couldn’t care less about being on the show and that she asked him to be on RHONY because he’s a part of her life. So, as far as allegations that Tom is just out for fame, De Lesseps has stated those are completely untrue. On this season of the show, it was revealed that D’Agostino made a mistake with a woman at a hotel and cheated on De Lesseps. The couple has chosen to work through the incident and are moving towards a New Year’s Eve wedding. For all the details on RHONY, De Lesseps’ feelings on the cheating incident and who the woman was that cheated with D’Agostino, read on below.

1. The Woman D’Agostino Cheated With Was an Old Girlfriend

Off to #europe #vacation ??

When the news broke that D’Agostino cheated on De Lesseps, it was said that a Playboy model of some kind was making out with him at a hotel in Manhattan that the Housewives frequent. On Access Hollywood Live, De Lesseps stated that the woman was an old girlfriend and it was not an affair. She said that she and D’Agostino had gotten into a fight and he went out that night. He made a poor decision and she has chosen to forgive him.

De Lesseps says that, looking back, she wishes she had digested the information before calling D’Agostino on the phone in front of the cameras and exploding. She also says she wished Bethenny Frankel would have pulled her aside to tell her about the cheating and show her the photos of D’Agostino kissing another woman. De Lesseps says she doesn’t know if Frankel had the best intentions. Watching the footage on the show, Frankel appears torn and upset about having to deliver this news. Frankel even attempted to contact D’Agostino before presenting De Lesseps with the unfortunate news.

2. De Lesseps Says D’Agostino Was Devastated After Being Confronted By De Lesseps

When first confronted by De Lesseps about his cheating, D’Agostino appears to deny it and says he doesn’t remember because he was too drunk. D’Agostino previously revealed to Radar Online:

With any relationship, there are always bumps in the road. We had one misunderstanding that led to actions that I deeply regret. What is important, is that we were able to work through it and we are stronger than ever.

With the cheating incident being a focal point on this season of Real Housewives of New York, D’Agostino and De Lesseps have had to relive the situation over and over again. De Lesseps stated that the ordeal has been difficult on both their friends and family as well as each other. On the other hand, De Lesseps has stated that the incident has made them stronger in their bond as a couple. De Lesseps told Access Hollywood Live hat there’s a reason your rear view mirror is much smaller than your windshield. She wishes to move on and forward.

3. D’Agostino Is a Wealthy Businessman

Gorgeous #summer #weekend in #Hamptons. Having so much fun on the boat with Tom Xo ❤️ #happy

There is no exact figure reported on D’Agostino’s net worth, but De Lesseps has called him a “millionaire businessman” and if he’s hanging out with some of the Housewives of the Upper East side, then he probably has some money under his belt. Bravo reports that D’Agostino has multiple homes from New York City to Florida and he has worked for companies including Workflow and Hano Document Printers. He also founded Smart Source LLC in 2003, where he is the President and CEO.

Clearly, a man who can afford an 8-carat yellow diamond engagement ring has an established lifestyle.

4. After Getting Married to D’Agostino, De Lesseps May Not Return to the Show

Luann De Lesseps has said that she is still working on her guest list, but Bethenny Frankel will most likely be invited. De Lesseps did tell Access Hollywood Live that Dorinda Medley, who introduced her to Tom, will definitely be involved. Medley gushed to The Daily Dish:

It’ll most definitely be in Palm Beach. Because that seems to be her new stomping grounds, and I believe — since she eloped for her first wedding — that this will be a truly magical Palm Beach almost-fairy-tale classic, old world wedding.

When it comes to Housewives stars Ramona Singer and Sonja Morgan, they’ve each claimed to have had relationships of some kind with D’Agostino though both De Lesseps and D’Agostino have down-played each. Being on the show throughout the engagement and cheating situtation, De Lesseps has stated on Access Hollywood Live that the girls have been catty from the get-go as far as her relationship with D’Agostino is concerned. Having to deal with the ups and downs of her relationship on such a large scale was difficult and De Lesseps stated that she may not return to Real Housewives after she marries Tom. She has talked about the “Housewives curse” and how being on the show isn’t always good for relationships.

5. D’Agostino’s Birthday Is the Day of Their Wedding

According to Bravo, D’Agostino turns 50 years old on New Year’s Eve, which is the day of the couple’s planned nuptials. De Lesseps told Bravo:

While De Lesseps has been married before, D’Agostino is a life-long bachelor and this is his first trip down the aisle. 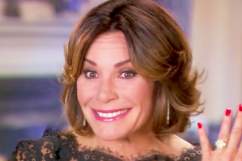