Jimmy Kimmel is the host of the 2016 Emmys and the last time that the comedian hosted the event was in 2012. So, who is the lucky woman married to the man who has a net worth estimated at $35 million?

Molly McNearney and Jimmy Kimmel began dating in 2009 and then Kimmel popped the question in 2013. They married the same year. The couple actually met in the work place and did not hit it off right away, but Kimmel ended up winning over McNearney with his cooking. McNearney previously told Glamour that Kimmel barely talked to her during her entire first year as an assistant at his office.

This past Mother’s Day, Kimmel dished to E! about how he pampered his wife, explaining:

In the morning, my wife and her mother and sister all went to get massages. While they were out, I made a fantastic brunch: waffles on the waffle iron, eggs, homemade biscuits. Good stuff, right? The flowers showed up on time. My wife loved the gifts I got her—including a bathing suit, which is a tough one,” he joked. “You can start a war buying your wife a bathing suit, but it fit perfectly. I wrote her a nice card. Of course I wrote it after she said, ‘Did you get me a card?’ But I did write the card. Don’t forget the card, by the way. They really want that card. I’d rather have a bathing suit, but women do love a card … I made a dinner reservation to a restaurant we’d been wanting to go to a couple weeks ago—in advance,so we didn’t have to beg or wait in line.

Kimmel said all went well until they brought their young daughter Jane to dinner and she was uncontrollable. He joked that:

Jane decided to celebrate Mother’s Day by making my wife wish she had no kids.

Prior to meeting wife McNearney and dating Sarah Silverman, Jimmy Kimmel was married to Gina Kimmel from 1988 until 2002. They had two children together. 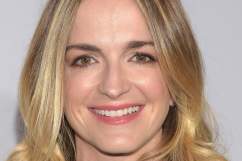 Read More
Celebrities, Emmys, Jimmy Kimmel, TV
Who is Jimmy Kimmel married to? Get to know the Emmys host's wife Molly McNearney, his family and their net worth.