Prior to Game 6 of the National League Championship Series between the Los Angeles Dodgers and Chicago Cubs, singer John Vincent was called upon to sing the national anthem for the second time in the series. And Vincent, who has been a singer at former Chicago Bears player and Super Bowl-winning head coach Mike Ditka’s restaurant for more than a decade, did not disappoint.

Vincent also handled the responsibility of singing the “Star-Spangled Banner” prior to Game 1, and his holding of the word “free” for 18 seconds gained a great deal of attention nationally. Vincent went past that mark Saturday night, with various estimates having him at just over 21 seconds.

Below is Vincent singing the national anthem prior to Game 1 of the NLCS. 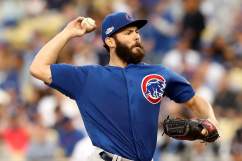 Read More
Baseball, Chicago Cubs, L.A. Dodgers, Mike Ditka, MLB postseason
Vincent held the word "free" for a staggering 18 seconds in his rendition of the National Anthem prior to Game 1.