Alan Thicke was known as Jason Seaver, the sitcom dad from the 80’s show Growing Pains, and he recently appeared on an episode of Netflix’s Fuller House. Sadly, TMZ has reported that Thicke has passed away at the age of 69 years old, leaving behind his real-life family and a wife who loved him. Read on to get to know Thicke’s wife Tanya Callau.

Prior to meeting Callau, Alan Thicke was married twice before her and he was even engaged to actress Kristy Swanson at one point. From 1970 until 1984, Thicke was married to Days of Our Lives actress Gloria Loring, according to IMDb. Currently, Loring is married to production designer Rene Lagler. In 1986, Thicke dated Kristy Swanson, who was just a teenager at the time, and the two ended up getting engaged. Their relationship didn’t work out and Thicke ended up marrying his second wife, Miss World 1990 Gina Tolleson, a few years later. They were married for about 5 years and Thicke met Callau the same year as the divorce, in Miami. 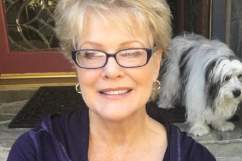 2. Callau’s Mother Was Recently Acquitted In the Murder of Her Husband

Home Sweet home ? Have a great weekend everyone! Xo

In 2013, Callau’s mother Ruth Miriam Callau was arrested and accused of paying employee Richard Terrazas to have her husband Petrus Dekker murdered, according to Pop Goes the News. Fortunately, in September 2016, Ruth was acquitted of the charges. Pop Goes the News reported that Terrazas was found guilty and sentenced to 30 years in prison, while Ruth was declared innocent.

Daily Mail reported that Dekker had been reported as missing for 10 days prior to his body being found. He was discovered with four gunshot wounds in the Santa Cruz region of eastern Bolivia.

3. The Couple Had Their Own Reality Show Together

Callau and Thicke appeared on several reality shows in addition to their own, which was titled Unusually Thicke. On the show, son Carter would often appear as well. The official synopsis of the show, as written on IMDb reads:

Alan Thicke is best known for playing a husband and father on classic sitcom “Growing Pains,” but he also plays the same roles in real life with much younger wife Tanya and opinionated teenage son Carter by his side. “Unusually Thicke” offers a “reality-ish” — an adjective used by Thicke to describe the series — peek inside the famous household. So what makes it reality-ish? To quote the actor further, the Thickes take their “relatable real-life stories and blow them up to amuse and amaze, tossing in a handful of celebrity friends along the way.”

In addition to having their own show, Thicke and Callau also appeared on Family Feud and Celebrity Wife Swap, Thicke changed spouses with comedian Gilbert Gottfried.

Guess who's on #familyfeud this Sunday?? ?

In his first two marriages, Thicke had three children, sons Robin, Brennan and Carter. Thicke had a heart attack while he was playing hockey with 19-year-old son, Carter. He was then transported to Providence St. Joseph’s Medical Center this afternoon, where he was pronounced dead, as reported by TMZ. Sons Brennan and Robin were from Thicke’s marriage to Gloria Loring, while Carter was from his second wife Gina Tolleson.

Many know Thicke’s son Robin, who is an award-winning music artist, famous for songs like “Blurred Lines” and “Lost Without U”.

5. Callau Has Worked As a Model and an Actress

When Callau met Thicke, they were both in Miami, where Thicke was working as a celebrity host and she was a model. The couple met in 1999 and married on May 7, 2005. In her acting career, Callau appeared in American Dad! and The Princess Diaries 2: Royal Engagement.