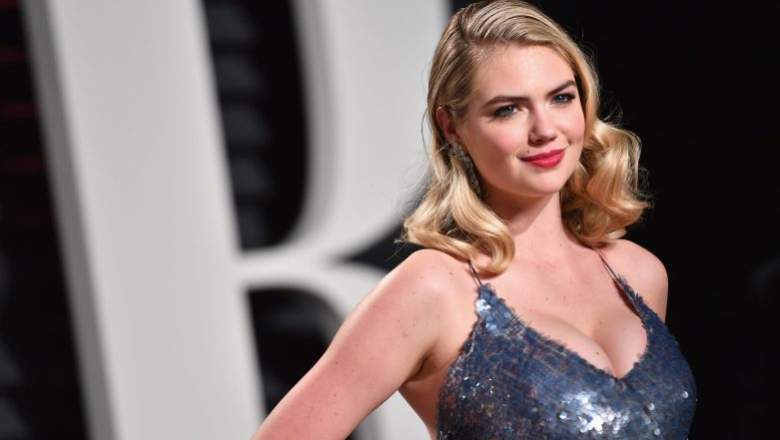 Who can deadlift 200 pounds, bear crawl with 300 pounds strapped around her back, and push a sled weighing more than 500 pounds?

It’s supermodel and actress Kate Upton. And according to her trainer Ben Bruno, she’s “insanely strong.”

Her bikini body formula doesn’t involve deprivation or crash diets. Instead, she relies on lifting heavy weights while living a balanced lifestyle, except for a short while just before big photo shoots when she gets a little more serious about her routine.

@kateupton does a 500 pound reverse sled push while texting with @justinverlander ?? Multi-tasking at its finest. Make no mistake, Kate makes it look easy, but this is very, very impressive, especially since reverse pushes are a lot harder than forward pushes. At first I gave her a hard time for being on her phone during the workout, but she actually went up 70 pounds from her previous best on this exercise, so I think we may have accidentally stumbled across a secret for increased strength ?☎️

In fact, Upton works out for an hour five to six days a week with Bruno.

He told People magazine that Upton typically starts her workouts with a warmup that includes foam rolling and dynamic stretching to get her muscles ready. After she’s warmed up, he leads her through a strength-training circuit with several exercises in a row without taking a break in between.

As a result, she gets a fat-burning cardio boost from her strength-training workout, which especially good for targeting abdominal fat.

2. She Is Insanely Strong

#Repost @benbrunotraining with @repostapp ・・・ Kate Upton (@kateupton) crushes a set of band-resisted hip thrusts with a brutal 10-second iso hold at the top of the last rep. Strong! The band adds accommodating resistance, meaning it gets harder at the top where the glutes have to work the hardest. Beware, these burn! ??

Her trainer said on the Today show that she might be the strongest person he’s ever had do weighted hip thrusts.

Her workout circuits include moves such as those weighted hip thrusts (which target the legs and butt, and during which Upton lifts upwards of 200 pounds), heavy single-leg Romanian deadlifts using a landmine, and squats, along with TRX rows and jump squats.

As a follow-up to yesterday's wrist strap tutorial, here's @kateupton crushing a set of heavy landmine single leg RDLs with great form. This is VERY impressive. Amazing exercise for the butt and hamstrings. ??

She can finish up a workout by pulling almost 300 pounds while doing a bear crawl, with some morale support from a four-legged friend.

Kate Upton (@kateupton) crushes this bear crawl/reverse sled push combo with almost 300 pounds on the sled while Harley (@harleyupton_) provides encouragement and watches her form. Kate does a great job completing this brutal finisher that smokes the legs and lungs, and Harley does a great job coaching. Teamwork at its finest ?? #Repost @harleyupton_ with @repostapp ・・・ LOL mom's on a leash and I'm not! @kateupton @benbrunotraining

Eating a donut while working out… I'm playing for the tie #donuts #balance ????

She eats more than just salads.

“On the diet front, I’ve learned balance,” she told People. “For example, rather than having wine and doughnuts, you can have wine or doughnuts.”

The underlying theme of the 2017 Sports Illustrated swimsuit issue was all about body diversity and acceptance, and Upton said she was proud to be included.

She told the magazine she works toward “a balance of working hard and eating healthy, but also enjoying life and having cheat days and for the emphasis not to be on the ideal perfect body.”

Upton follows Bruno’s diet philosophy. He recommends that his clients use a basic nutrition template when it comes to their diet: starting with proteins, adding in vegetables and healthy fats, and then unrefined carbohydrates. He also warns that deprivation diets can backfire.

And while Upton said she does enjoy ice cream, French fries, and other fattening foods, she did admit that before a big photoshoot she cuts back on sugar and cheat days.

4. She Was an Equestrian as a Kid

She has a history as an athlete. As a teenager, she was a nationally ranked equestrian with the American Paint Horse Association.

"Hold on to what makes you happy if it tries to buck you off, just hold on even tighter" ? my first horse coolio ?

Plus, her parents are athletic. Her mother, Shelley Upton, was a former Texas state tennis champion.

Her father, Jeff Upton, is a high school athletic’s director.

Kate Upton (@kateupton) crushes some heavy landmine bench squats with great technique. Strong! Taller lifters, and particularly those with proportionally longer femurs, tend to struggle to stay upright with traditional squats and often default to folding forward, which puts a lot of undue strain on the lower back. Using the landmine helps to stay more upright to protect the lower back, and the arc of the bar helps encourage more of a posterior weight shift to work the glutes more while also taking stress off the knees. As an added bonus, loading in this manner is also a great way to work the anterior core and upper back. Squatting to a bench serves the dual purpose of being a depth gauge to ensure a full range of motion while also helping to aid with form.

He created a sample 5-exercise circuit workout for the Today Show, which he recommended doing three times though. 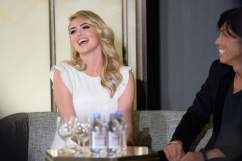