Jennifer Lopez and Alex Rodriguez have been dating since March 2017. The two have been spending the holidays together as a blended family, each having children from previous relationships.

According to The Sun, J.Lo and A-Rod initially reconnected last year at one of her residency shows in Las Vegas and really hit it off. They had met at least once previously, when J.Lo and her ex-husband, Marc Anthony, attended a Yankees game 12 years ago.

According to a recent Instagram post from Rodriguez, they recently went cruising with their kids in a red convertible.

On May 14, 2017, the New York Yankees retired Derek Jeter’s number in a televised ceremony before a game. While many people expected to see Jeter’s longtime teammate at the event, Rodriguez was a no-show. Some fans may not have realized that Jeter and Rodriguez aren’t as close as they once were, the Daily Mail citing a 2001 “diss” by A-Rod as the thing that broke down their bromance.

Although many believed that A-Rod would have attended Jeter night out of respect for one of the greatest shortstops in baseball history, the former Yankees slugger opted for dinner with his leading lady.

According to TMZ, A-Rod flew to New York from Miami on Mother’s Day after spending the morning with his family and joined up with Lopez for a sexy night out at Nobu. 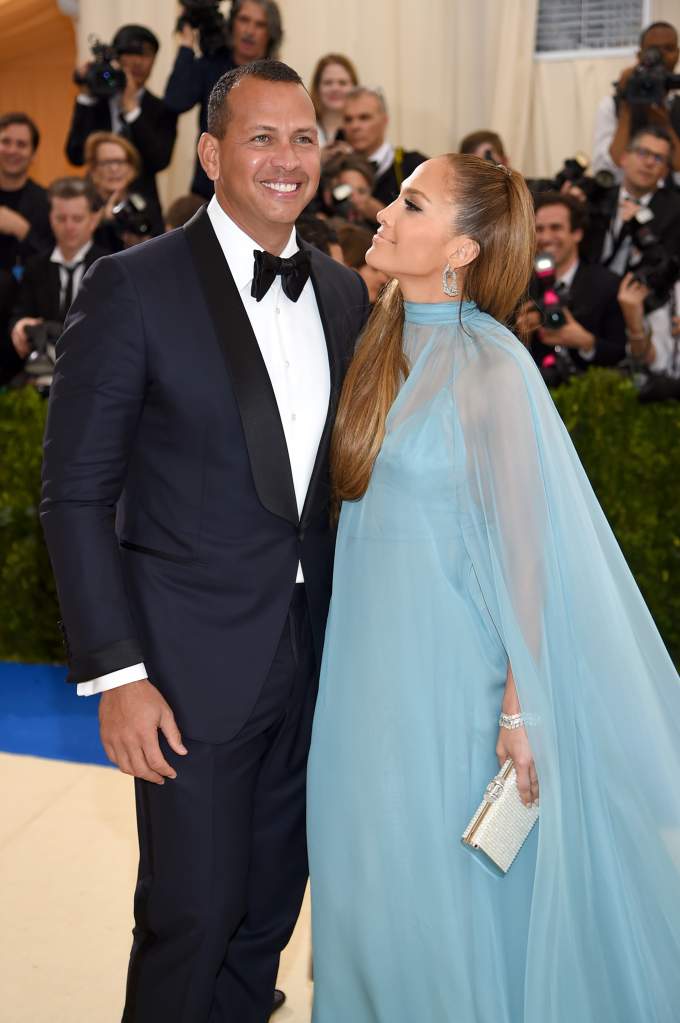 Lopez brought her new man to the Met Gala on Monday, May 1, 2017. The couple made their very first “red carpet” debut (on an ivory carpet). Lopez wore a light blue Valentino gown while A-Rod donned a navy blue Tom Ford tuxedo. The two posed for photos together and shared some sweet gazes before heading inside the Metropolitan Museum of Art.

Before the event, both Lopez and Rodriguez posted photos from their car on the way to the Met.

3. Lopez Opened Up About Her Romance on ‘The Late Late Show With James Corden’

Lopez has been relatively open when it comes to her new romance, clearly not trying to hide the fact that she and A-Rod are an item.

You can check out the video of Lopez talking to Corden below.

Rodriguez has shared similar sentiments about Lopez as well. As a guest co-host on The View, Rodriguez was asked about his new girlfriend, calling her “amazing.”

“It’s obvious. We’ve been having a great time. … She’s an amazing, amazing girl. One of the smartest human beings I’ve ever met. And also an incredible mother,” Rodriguez said.

You can check out A-Rod on The View in the video below.

Lopez has two children with her ex-husband, Marc Anthony. Twins Max and Emme are 9 years old. Rodriguez has two daughters, Natasha, 12, and Ella, 8, with his ex-wife, Cynthia Scurtis. According to People Magazine, J.Lo and A-Rod have introduced their kids and even spent the Easter holiday as a family of six.

“[They] all participated in an Easter egg hunt (one golden egg contained a $100 prize and others held candy or smaller amounts of money) while digging into omelets, pancakes and pastries,” People reported.

And this wasn’t the first time that the kids had met.

“It’s always unpredictable when you try to merge two families with young kids, but so far so good. The kids have all spent time together, and everyone is getting along,” a source told the magazine.

Below are a couple of photos showing Lopez with her two children and Rodriguez with his.

5. They Both Have an Extensive Dating History

Me and my macho bello…#MetGala2017 #Valentino

Before they found each other, Lopez and Rodriguez dated quite a bit.

When she first broke on to the music scene, J.Lo dated Sean P. Diddy Combs. The two broke up in 2001, the same year that she started dating Chris Judd. The two married after seven months of dating, but divorced on year later. Lopez then found love with actor Ben Affleck, but their relationship only lasted two years. Lopez married Marc Anthony on June 5, 2004. The couple welcomed two children before divorcing in 2014. J.Lo then dated her backup dancer, Casper Smart, from 2011 until 2016.

Rodriguez married Cynthia Scurtis on November 2, 2002. The couple welcomed two daughters before divorcing in 2008. Since that time, A-Rod has been linked to Madonna, Kate Hudson, Cameron Diaz, and Torrie Wilson, to name a few.