Tonight, FX’s new series, Snowfall, centers on the origination of crack, and comes from the director of Boys N The Hood, John Singleton.

The show is set in South Central Los Angeles in the 1980s– highly regarded as the epicenter of the crack cocaine epidemic. According to USA Today, the show will focus on three different storylines– that of Franklin, a young weed dealer, Lucia, a woman trying to build her own cocaine business, and Teddy, a CIA agent who takes over the cocaine business of a dead fried.

Read on to learn more about the cast who makes up the series.

Idris, 26, is a British film and television actor, who was born in Packham, London, and is of Nigerian descent. Idris studied at Brunel University in London, where he received a BA in Theater, Film, & Television. He made his debut in the BBC comedy series, Miranda, after which he landed a role on Doctors and Casualty.

On the big screen, Idris has held roles in films like City of Tiny Lights alongside Riz Ahmed, Megan Leavey, and The Commuter.

Angela Lewis was born and raised in Detroit and attended the University of Michigan. She has appeared in TNT’s The Last Ship, Chris Rock’s comedy, Top Five, and played a role in Law & Order: SVU. Her other guest star credits include CBS’s Code Black, CBS’s The Big C, and The Good Wife.

Isaiah John was born and raised in Atlanta, Georgia, and began to express an interest in acting at age 14. As he trained as an actor, he began to develop an interest for what happened behind the camera, and worked as a PA for a brief time. He’s worked on a number of short films and pilots. Between gigs, John worked as a janitor at a local gym.

Actor Juan Javier Cardenas is a Florida native, and has worked in a number of film, television, and regional theater productions. On the small screen, he’s appeared in NCIS: Los Angeles, Criminal Minds, Beyond Borders, Frequency, and Law & Order: SVU.

He received his BFA from the University of Florida and a MFA from Florida State University Asolo Conservatory of Actor Training. An avid musician, Cardenas has also been recording music for years.

Aboutboul attends the “Septembers of Shiraz” premiere during the 2015 Toronto International Film Festival.

Aboutboul has been appearing in films and television series since the early 1980s. In 1989, he received the Israeli Film Academy Best Actor Award for his work in Ehad Mishelanu. Since then, he’s been nominated for best Supporting Actor three times, and won the award in 2003 for his work in Nina’s Tragedies.

In Ridley Scott’s Body of Lies, Aboutboul played a role alongside Leonardo DiCaprio. He also appeared in Christopher Nolan’s The Dark Knight Rises and Spielberg’s Munich.

Most recently, he’s starred in London Has Fallen, and Hand of God.

Emily Rios is perhaps best known for starring in FX’s The Bridge, for which she received a Best Supporting Actress nomination at the Imagen Awards and the National Hispanic Media Coalition Impact Award.

This summer, Rios can be seen in Paint It Black. Her other notable big screen credits include The Winning Season, Pete Smalls is Dead, The Blue Hour, and Down For Life.

Malcolm Mays was born and raised in Los Angeles, and is an actor, musician, and filmmaker. He acts in Rebel, on which he plays a character named Brim.

In Southpaw, Mays played a role opposite Jake Gyllenhaal. In Life of a King, he played the leading role of “Tahime” opposite Cuba Gooding Jr. and Dennis Haysbert. In 2013, he was nominated for a Grammy Award for his collaboration with Tristan Wilds for New York: A Love Story.

Costa was born and raised in Lisbon, Portugal, and became an actor at age 17. Upon telling his parents about his dreams to go into show business, his parents urged him to pursue a tennis scholarship so he could study with a student visa. Costa subsequently landed a scholarship in Iowa, where he received his Bachelor’s degree in Theater.

Upon moving to NYC, Costa made a name for himself in the world of theater. His credits include Lilia, Good Grief, Henry V, and End Days. His television credits include Blue Bloods, Gotham, and Unicornland. 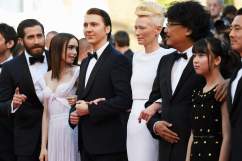