Getty Former talk show host David Letterman speaks during a celebration of the 5th anniversary of Joining Forces and the 75th anniversary of the USO at Andrews Air Force Base in Maryland, May 5, 2016. / AFP / SAUL LOEB (Photo credit should read SAUL LOEB/AFP/Getty Images)

David Letterman is back, but will coming to us from a whole new medium: Netflix.

The late-night talk show legend, and former CBS “Late Show” host, has signed on to do a 6-episode talk show set to premiere next year. The show does not yet have a name.

Letterman retired from late-night TV in May 2015 after spending 33 years on network television. In a statement, the LA Times reports him as saying:

I feel excited and lucky to be working on this project for Netflix… Here’s what I have learned, if you retire to spend more time with your family, check with your family first. Thanks for watching, drive safely.

The New York Times reports that the series doesn’t yet have a set format– all that is still being discussed.

Netflix has said they are looking forward to the show that will combine, “two interests for which he is renowned: in-depth conversations with extraordinary people, and in-the-field segments expressing his curiosity and humor,” reports the New York Times.

Letterman is now 70. Late Night with David Letterman debuted on NBC on February 1, 1982, and ended May 20, 2015. Letterman has also worked as a producer— his company, Worldwide Pants, produced his own show, along with The Late Late Show with Craig Ferguson, and Everybody Loves Raymond.

Letterman was born and raised in Indianapolis, Indiana. He attended Ball State University in Muncie, Indiana– he began his broadcasting work at the school, where he worked for the college-run radio station, WBST. 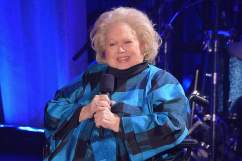