Khaled will likely hit this evening’s red carpet with his longtime fiancee, Nicole Tuck. Read on to learn more about the couple.

1. The Couple Welcomed Their Son in October 2016

All my love ones meet my JOY!! MY HAPPINESS!! MY SON!! ASAHD KHALED YOUNG ICON!!!!!!!! My son truly showed me what love is what joy is what happiness is !!! ASAHD YOU SHOWED ME WHAT LIFE IS !! I'm so grateful GOD HAS BLESSED ME WIT MY BIGGEST BLESSING!!! ASAHD I GOT US FOREVER !! I LOVE YOU!! ASAHD YOU MY EVERYTHING!! MY LIFE HAS CHANGED ! FOR THE BETTER BECAUSE OF YOU SON!! MY TEARS ARE HAPPINESS , JOY!!!! ASAHD YOU MADE ME EVEN STRONGER !! ASAHD I HAD SUCH A BIG BIG AMAZING BLESSING YEAR!! And came from YOU AND GOD !! I WILL WORK HARD FOR YOU ASAHD I WILL GIVE YOU NOTHING BUT JOY!! I WILL RAISE YOU WIT LOVE JOY!! I LOVE YOU SO MUCH! NO WORDS CAN EXPLAIN HOW MUCH I LOVE YOU !! TO MY QUEEN THANK YOU FOR BIRTHING MY BIGGEST BLESSING! My SON ASAHD TUCK KHALED!! I LOVE YOU! FAN LUV AND ALL MY FAM IM ABOUT LET GO HUNDRED PICS OF THE YOUNG ICON ASAHD KHALED !!!!! ????????? I LOVE YOU SO MUCH !!

DJ Khaled and Nicole Tuck welcomed their son, Asahd, into the world on October 23, 2016. According to People, Asahd was born at 2:05 am, and weighed 7lbs.

The couple walked the red carpet together at the June 2016 BET Awards, and Tuck showed off her baby bump.

Tuck and Khaled announced their pregnancy in May 2016, exclusively to People. In a statement, the rapper said, “I’ve always wanted kids… This is my first kid and I’m excited and I want more. I’ve always wanted to be a family man. I’m in a great family and I want to have my own family at the same time.”

2. Tuck Is the Owner of Abu Apparel

According to her LinkedIn, Tuck is the owner of a small clothing business called ABU Apparel, which she started in 2011.

Tuck’s interest in clothing is fitting, considering that her son has become somewhat of a baby fashion icon. Wendy Williams gave Asahd a special onesie not long after his birth, and Khaled has directly said he intends to spoil his son and make him “his very own mini-me.”

Thank you @wendyshow for this amazing gift for my son thank u so much !!!

This one is still a bit confusing. In July 2013, DJ Khaled proposed to Nicki Minaj on MTV.

I was shocked just like the rest of the world and I was cracking up laughing with the rest of the world ’cause Khaled is a master at what he does,” Minaj said, adding that she hasn’t talked to Khaled about the gag yet. Nobody in my real life took it seriously. Everybody just hit me like, ‘LOL. Yo, Khaled is crazy.’ Khaled is my brother and Khaled was not serious with that damn proposal, ya’ll… Please let it go. He was kidding. He’s not attracted to me, he doesn’t like me. We’re brother and sister.

MTV reports Minaj as adding on that Khaled pulled the move as a way to draw more attention to his new album.

He posted the clips to his own music from his album Major Key. When asked about whether or not Tuck wanted this to happen, Time reports Khaled as saying, “The key is that I’m the king and every queen should support the king. I’m going to talk to the doctor and if the doctor says everything is gonna run smooth, meaning that we wanna make sure that the queen is right and my son is right. If it’s running smooth where I can just do my thing, I’mma Snapchat the whole thing.” 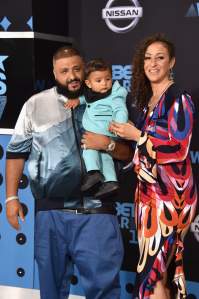 Khaled attended this year’s BET Awards with his son, Asahd, as well as Tuck. They weren’t the only stars who brought their kids– Jamie Foxx, Chris Brown, and Beyonce all brought their children as dates, too.

Asahd sported an adorable baby blue suit made by Gucci. Speaking earlier to ET, Khaled said, “I love him so much, mommy loves him so much, our whole family loves him and the world loves him… God gave me my biggest blessing. 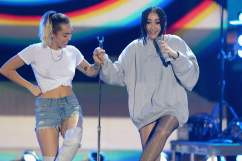 MTV Video Music Awards Attendees 2017: Who Is Attending the VMAs?