Well, it looks like AdultSwim.com had a big problem with its live stream yet again this week. Rick and Morty started halfway through the episode thanks to a Fish Center live stream running instead. Many fans truly understood the meaning of wubba lubba dub dub tonight.

Thank you for this exhilarating fishcenter show @RickandMorty pic.twitter.com/8PMLkgA1Rh

But we’re betting this was a technical glitch and not done on purpose.

Some people said they could click around and get the episode to run, but for most people the live stream didn’t start working until halfway through the episode.

As for FishCenter, it’s actually an AdultSwim show. It’s a “live, daily marine-themed call-in show. This show centers on the inhabitants of the Williams Street fish tank,” according to AdultSwim.com. If you didn’t get enough of it, you can watch it live all the time at this link . You can even watch archived shows, and the featured fish even have names, like MOM the Arothron Meleagris.

The fish are awarded points based on completing challenges, such as floating over coins superimposed over the video feed. It’s narrated by employees of Adult Swim.

This talk show premiered on Adult Swim in September 2014 and started airing on TV in February 2015.

Who knows, maybe this was just a way to get more people to know that Fishcenter exists. 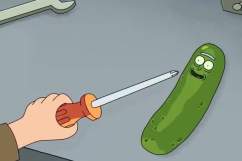 ‘Rick and Morty’ Live Stream: How to Watch the Season 3 Episode 3 Premiere Online for Free