On Shahs of Sunset, Golnesa “GG” Gharachedaghi falls quickly for boyfriend Shalom Yeroushalmi. The couple even ended up at the altar, but were only married for a couple months before calling it quits. On tonight’s episode, viewers finally get to meet the man who won GG’s heart … at least for a little while. The two were living in the same building and one day began chatting in an elevator. Soon, the couple were spending every day with each other. You can actually watch the ex-couple get married in the above video.

When GG filed for divorce from Shalom Yeroushalmi, TMZ reported that irreconcilable differences were cited in the court documents. As to why exactly the marriage ended, GG told People:

In the simplest terms that I can put it, I would say submissions breeds resentment … I have never believed in marriage. I did something to make someone else happy and I completely regretted it afterwards. I knew what I did was wrong and it wasn’t for me or for my happiness, but for someone else, and I guess for one moment I thought maybe someone else’s happiness will do it for me. And it didn’t.

I know it sounds silly because it was such a short relationship, but it happened so fast and the intensity of everything that happened — what would happen in a four-year time frame happened in a four-month time frame. We went to a therapist that we’d been seeing for two months and we were trying. I was giving it every chance to fix things and see what can come of it. I just couldn’t — things couldn’t change.

GG said that one of the red flags she should have paid attention to prior to getting married was when her parents told her it was an “irrational move”.

As for getting married in the future, GG told Hollywood Life that she’s more focused on motherhood. She explained:

I still want kids I just don’t want a husband. I think I’m going to start fishing for my hottest friends that have the highest intellectual capacity and just ask them for some of their best swimmers. I don’t want to just go to a sperm bank. I want it to be a friend so they can be in my children’s lives … I do want to adopt probably at some point, but I feel like first I want to have my own. I want to feel the feeling of being pregnant and giving birth. So I need to get on it like yesterday.

On Shahs this season, several of GG’s co-stars are either considering having kids or are actually pregnant. 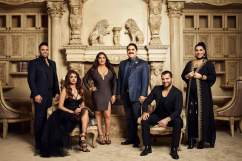 Read More
Reality TV, Shahs Of Sunset, TV
Who is GG dating on Shahs of Sunset? Get to know about Golnesa Gharachedaghi's boyfriend, Shalom Yeroushalmi, on Shahs.