After a first episode that felt more like five different shows smashed into one, the unifying conspiracy that will bring Daredevil, Jessica Jones, Luke Cage and Iron Fist is finally starting to take shape. New York City has literally been shaken by a mysterious quake and Jessica found a box of explosives during her search for John Raymond.

Will any of the four Defenders finally meet each other in “Mean Right Hook”? Read on to find out, and get a look at some Easter eggs along the way.

The episode picks up right where the last one left off, with Matt’s ears lighting up. The sounds of his city in danger are overwhelming. When he hears a man about to pull a gun out, he rushes into action while still wearing his suit and tie. He watches a man and woman running away with some stolen electronics. Matt snaps into action to stop the store owner from using a shotgun to kill them. He punches another man until he’s senseless. The store owner asks, “Who are you?” Matt walks away as the main title begins.

When Matt arrives home, he’s out of breath and realizes just how out of shape he is. He’s also frustrated with himself for jumping into action like that. He opens his closet and unlocks the trunk with the Daredevil costume. It’s all still there, staring at him. The moment is broken up when Foggy calls.

Foggy and Matt meet at Josie’s for a drink to catch up. Foggy wants to know where his relationship with Karen is going. They’re “figuring things out.” Foggy sees Matt’s knuckles and asks how he handled the quake. Matt gets up to leave, but Foggy wants him to stay. He offers him some cases to take. Foggy says the cases will help him keep his mind off the urge to be Daredevil. “What if it doesn’t work?” “Then we tried anyway.”

Trish tries to get Jessica on the phone, since her neighborhood was hit the worst by the quake. As she’s walking to her radio station, Trish sees her car in a pothole the quake created. Somehow Trish gets to work and tells her first caller not to worry about the quake. (Easter egg alert: the “incident” the caller refers to is the Battle of New York seen in ‘Marvel’s The Avengers,’ when The Avengers fought the Chitauri army.)Another caller from Brooklyn claims it wasn’t an earthquake. The caller is a geologist who said that the quake was only 300 feet deep, so it wasn’t natural. Just as she is trying to explain, the caller is cut off. Her producer tells her that their bosses told her to lay off the earthquake talk.

Misty arrives at a crime scene – it’s John Raymond’s apartment. Homeland Security and the FBI have already been at the scene and the police have to keep the press away. It turns out that Jessica called authorities to the apartment. Jessica told the FBI that she was following a client and said she didn’t see the man who rented the apartment. The FBI tells Jessica she can go. As she leaves, Jessica takes some paperwork and Misty runs after her. But Jessica has disappeared.

Jessica took the papers to an office, and she pulls out another form that lists the company “Twin Oaks Shipping Company.” It matches the name on the paper. She finds a case folder from 1998 and takes a picture of what’s inside. It’s a transfer of assets. She keeps finding transfers of assets, going back to 1820. She finds a woman working in the files and tells her that she might have to go back even further. She’ll have to go to the uptown historical branch. “Actually, you don’t,” Hogarth (Carrie-Ann Moss) says. They need to talk.

Jessica is not happy about having to talk with Hogarth. She tells her to be careful because the John Raymond case is bigger than she can handle. “Walk away. Whatever this is, let the Feds handle it,” she tells Jessica. Raymond’s disappearance is now a matter of national security and hundreds of people are on the case. Jessica insists there’s nothing in his background to suggest he’s a terrorist, but Hogarth reminds her of the explosives. Hogarth insists that she doesn’t want to see Jessica stuck in the crossfire. Jessica shrugs her off and walks away.

Hogarth tells Foggy that he needs him to keep a look on Jessica. If Jessica gets into any trouble, he’s to make sure that the trouble is as far away from them as possible.

Jessica arrives home, and talks to Trish while walking down her hallway. Trish tells her that she thinks her bosses want her to keep the quake swept “under the rug.” She tells Trish she’ll have to call her back because her door is open. She goes in to find Malcolm held hostage by Raymond. “I told you to stop following me!”

Jessica tries to calm Raymond down. He asks her if she’s working with anyone, but Jessica says she’s not. There’s a “they” after him and Raymond can’t tell her who it is. She tells him the police only want to know what he needed the explosives for. Whoever it is, they are planning to take the city down. “I never should have come here!” he says.

But then, Elektra storms in! She grabs Raymond by the throat, but he shoots himself before he can give up any information. Jessica tries to stop Elektra, and follows her through the building. Jessica gets all the way out of the building and Elektra’s gone. But Misty is suddenly there and tells Jessica to put her hands up.

NetflixFinn Jones as Danny Rand and Jessica Henwick as Colleen.

Colleen arrives at the dojo and is happy to see there’s no damage. She’s surprised to find Danny laying on his back. She catches him up to speed on the quake. He’s meditating to prepare for another meeting with the assassin from Cambodia. Colleen says she’s been thinking about the man who died in their arms. She thinks his sacrifice was proof that Danny isn’t alone in fighting the Hand.

“So what? We just go and find a team to join? An Army?” Danny asks. Colleen suggests they take a shot in the dark to find other people in New York to help them. She has a plan – the man fought with a Tuskamoto, a rare sword. There’s a workshop in New York City where the man might have visited. If the guy didn’t go there, they’ll keep trying. But Danny is still scared about trusting other people. “But do you trust me?” Colleen asks. “Yeah,” Danny nods. (Yes, Iron Fist, the star of the worst Marvel Netflix show, is going to be the ringleader for the Defenders.)

Colleen, armed with her sword, and Danny go into the mysterious workshop. They see a Tsukamoto sword there, but no one appears to be there at first. They follow a trail into a back room, where they see dead bodies that are still warm. One person was dragged out. “This must have been The Hand,” Danny (a.k.a. Captain Obvious) says. In the room, they find a painting of K’un-Lun.

“It doesn’t make sense,” Danny says. “Why did these people have a picture of K’un-Lun?” Someone comes to interrupt. They see three men come in wearing gas masks. They spray everywhere in the room. “They’re not going to get away with this,” Colleen says.

NetflixRosario Dawson as Claire and Mike Colter as Luke.

We finally catch up with Luke late in this episode, with him and Claire helping the people hurt by the quake in Harlem. Thankfully, no one died. Luke tells Claire that he’s going to head to a bar tonight to investigate the new odd jobs young men in Harlem are taking. Claire asks him if the NYPD will pay him for doing their job. Luke insists he has to step in and take responsibility because someone has to. Claire reluctantly tells him that if he’s looking for a place where people go to do dirty work, it’s on 188th Street at a place called “Trouble And A Pair of Dice.”

Luke finds his way to the bar and overhears a guy named Turk (Rob Morgan) talking. (Easter egg alert: Turk has appeared in Daredevil and Luke Cage already.) Luke takes him to a back room and learns that Mariah and Shades have left Harlem. They aren’t working with these young men. Turk says he’s heard about this, but he couldn’t get in on it because he’s too old school. Turk says the man behind it is someone called “White Hat” because of his unique fashion sense. Luke can find him at around 151st and Amsterdam, Turk says.

Luke arrives at the address and sees a blue van pulling up…and “White Hat.” He calls Misty to tell her to come down with a warrant. When Misty asks for an address, he refuses after seeing Cole. He hangs up on her as he sees Cole go into the van and White Hat go in the building.

The first scene with Alexandra finds her sitting in a concert hall by herself, listening to a quartet play. She’s made a major donation to the philharmonic, and is congratulated by a staffer. She tells Alexandra that she chose to hear an odd Johannes Brahms piece, one that was influenced by Mozart. But Alexandra says it wasn’t influence but a direct response to prove he could write that way too. While talking music, Gao randomly shows up. There’s bad news.

Their plan has hit a road bump. They hit a “wall” that’s covered with phrases about K’un-Lun. The wall can’t be removed. “They knew we’d get here… eventually,” Gao says. She tells Alexandra that she should rethink this, but Alexandra wants to keep going. She thinks it’s actually a door, not a wall. Alexandra says they need to find a key – and that key is something that the monks of K’un-Lun valued the most.

Colleen and Danny fight the group and one man gets out. Danny tracks him down and asks if he’s with The Hand. But the guy, revealed to be Cole, insists he’s just a member of the cleanup crew… and that’s when Luke Cage shows up! Luke throws Danny off and Danny challenges him to a fight. Remember, this is Marvel, so the first thing two heroes have to do when they meet is fight each other.

Danny is stunned by Luke’s strength. Luke knocks Danny down and his fist lights up. He hits Luke in the face, blowing Luke all the way into a garage door. The police show up and arrest Cole. Danny and Colleen flee the scene, and Luke is not happy.

Later, Alexandra shows up in a shadowy room. She tells an “old friend” not to bit when she takes his hood off. It’s Stick (Scott Glenn)! He’s not really dead… yet, anyway. “We have so much to talk about,” Alexandra says.

At the police station, Misty is interrogating Jessica, who is the worst person to try to interrogate. Jessica says she was genuinely trying to help Raymond. Jessica knows that Misty isn’t going to believe that a sword-wielding lady (who we all thought was dead) came after Raymond. “Look, I know that you think you’re just doing your job, but I’m telling you this case isn’t normal. You are walking into some weird ass shit.”

And that’s when Matt walks in! He tells her to stop talking because he’s her new attorney. Look, two heroes just met and didn’t start immediately punching each other!

Stay tuned for the recap of episode three! 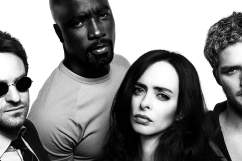 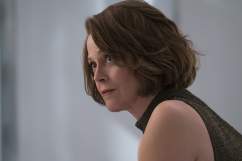