Taylor Swift released her new single, “Look What You Made Me Do,” on Thursday night. The highly anticipated track is a new sound for Swift, who has completely abandoned her country roots for a pop-techno-a-la-Britney-Spears jam that is sure to climb the charts faster than you can hit the download button.

Whether you are a fan of Swift or not, you probably know that she has made a habit of writing lyrics about her personal life. Most of her songs have been about past relationships. For example, she supposedly wrote “Bad Blood” about rival Katy Perry, and she has a bunch of songs about her ex-boyfriends including Taylor Lautner (“Back to December”) and John Maher (“Dear John”). Oh, and who could forget her hit single, “We Are Never Ever Getting Back Together,” supposedly written about actor Jake Gyllenhaal? And, yes, there are plenty more (check out a more thorough list here).

So, who is Swift’s latest target? According to Rolling Stone, it’s Kanye West. Unsurprising to fans, Swift was bound to pen a song about West after a very big fiasco that had Swift up against a wall. In short, Swift’s rep denied that West called the “Shake It Off” singer to run lyrics for his song “Famous” by her. West’s wife, Kim Kardashian, called Swift out, posting actual video/audio of West on the phone with Swift. The posts were uploaded on Snapchat and people immediately began calling Swift a liar and a snake.

In the days leading up to this release, Swift uploaded three videos of snakes. It seems more than obvious that she wrote this song as a way to address the situation with West.

“‘I don’t like your little games/ I don’t like your tilted stage,’ Swift viciously sings. ‘The role you made me play: of the fool/ No, I don’t like you.’ Later, Swift uses an effect that approximates singing through a phone. ‘The old Taylor can’t come to the phone right now,’ she says. ‘Why?/ ‘Cause she’s dead,'” reports Rolling Stone.

You can listen to the full song below.

Swift’s new album Reputation is currently available for pre-order. It will be released on November 10 — and will more than likely contain a bunch of other diss tracks. 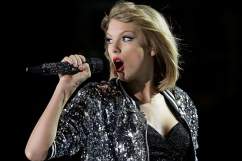