Congratulations to #LesTwins you guys are INCREDIBLE! Thank you @JLo for such an entertaining show! #WorldOfDance #JLo @NBCWorldofDance pic.twitter.com/hm9JOoRyHo

Tonight is the finale of World of Dance and there are three contestants left in the finals. The dancing acts consist of Eva Igo, Les Twins and Swing Latino and we are updating this post live with the winner results and recap of events.

Each act had to perform twice tonight. Les Twins was up first, decked out in red and dancing to the song “Stole the Show,” which judge Jennifer Lopez advised them to use as their performance piece. The two used a rotating platform in their dance and they got rave reviews from the judges. Next up was dance group Swing Latino and Derek Hough gave them the song “Conga” by Gloria Estefan for their first performance. Hough told them he was hoping for the wow moments and the footwork with their performance. Unfortunately, one of the dancers has to sit the performance out because he suffered a broken bone. After their set, Derek Hough said he wished that certain parts of their dance had been more clean, but that he loved their energy. Their first dance put them in second place after Les Twins. But, Eva Igo was next up.

Ne-Yo met with Eva Igo before the finale and asked her to show more emotion in her dances. In turn, he asked her to perform to “In the Air Tonight” by Phil Collins for her first set on the finale episode. After her powerful performance, judge Derek Hough said Igo was the complete package. Though her performance was full of emotion, her scores put her in last place for the first performances.

For the second performances of the night, Igo took the stage first and performed a dance to Sia’s song “Alive.” Again, her performance was full of power and at the end, she disappeared into the stage. JLo gushed over the choreography and said that it was even better than her first performance. Hough called Igo “a star”, while Ne-Yo a beautiful monster. When talking about her family and dancing in general, Igo began to cry about her family’s financial struggles. This time, Igo got a much higher score and created an average score of 93.7. For Swing Latino’s second dance, they incorporated chairs and their performance was high in energy. In combination with their first performance, their average overall score was 93.2, which was less than Igo’s score, so Igo is in the lead. This means that Les Twins has the final performance that could change it all for Igo …

For Les Twins’ final performance, they incorporated mirrors and performed to Michael and Janet Jackson’s song “Scream”. Ne-Yo praised the duo for their performance and said they make every piece of work they do original. In scoring the twins, the final average score came out to be 93.8. And so, Les Twins is the winning act.

Dance duo Les Twins is made up of identical twin brothers Laurent and Larry Nicolas Bourgeois, whose nicknames are “Lil Beast” and “Ca Blaze”. Their dance genre is hip-hop and they have been back-up dancers for big artists including Beyonce, Meghan Trainor, and Missy Elliott. In addition to dance, the duo has also done some modeling and they even did modeling work for fashion designer Jean Paul Gaultier.

As for 14-year-old, Eva Igo told Entertainment Tonight that she only brought a week’s worth of clothes to be on World of Dance because she didn’t last very long. Igo said:

When I first stepped onto the World of Dance stage, it was really scary. I didn’t even think I’d make it through the first round.

The young dancer said she went on the show to learn how to dance better, though she has been performing since she was 5 years old. She even appeared on the reality show Dance Moms. The other act is Swing Latino, whose group is made up of 21 members, according to Hollywood Life – Nilson Riascos, Deisy Zapata, Kevin Mosquera, Steven Montaño, Ingrid Tabaez, Lina Montoya, Jhon Colorado, Cristian Montenegro, Jhon Caicedo, Paula Guevara, Jeimmy Iarguelia, Yohana Calambas, Jonier Torres, Luz Posso, Jenny Rodríguez, Carlos Marquez, Andres Diez, Saray Duque, Johan Moreno, Eliana Saavedra, and Emanuelle Campaz.

The three remaining acts were competing tonight for a $1 million prize. 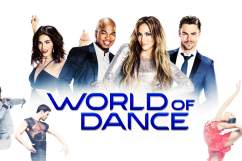 Read More
Reality TV, TV
Who are the top 3 winners in the 2017 first ever finals of World of Dance? Check out the contestants here.