Eric & Jessie, Eric and Jessie James Decker’s reality show, premieres another season tonight and fans get to go through every day life with the couple once again. But, what’s going on with the couple right now?

In recent months, the Deckers have put one of their homes on the market and CBS Sports reported that Eric signed a one-year deal with the Tennessee Titans. Coach Mike Mularkey talked about getting to know Decker and how he became part of the team, revealing:

We brought him in, and I talked to him this morning for about 25 minutes. I got a chance to meet him; I’d never met him. It’s similar to a draft (visit), when you do the top-30 visits, it’s a similar situation. You get a chance to meet them and do a physical. The whole visit was to get to know him, and make sure he is healthy.

Eric Decker has struggled with injuries in his recent past, so that was important for Mularkey to check out.

We’re back!!!!! The third season of Eric & Jessie premieres on E! on September 6th at 10 pm. I know y'all have been wanting this back for awhile and I can finally say we are ready to share more memories with you! Thanks for being patient with us for these past couple of years and being such a loyal fans!!! I know y'all are going to LOVE this season ❤️❤❤

With all the changes going on, one might think that the Deckers might want to simplify their lives, but an Eric & Jessie promo video has shown Jessie saying she wants to have a third child. Previously, the couple wanted to take a break from their show because they didn’t want cameras around their children so much. Clearly, they have changed their minds, explaining to Entertainment Tonight that:

The first few seasons we were new at it. It was really scary. But now I am one of the executive producers and I have a ton of control. That was really important for me, just to protect my children. So I can say, ‘Hey, we’re not filming today.’ Or, ‘The kids need a nap, they’re worn out and I don’t want to be filming right now’ … And even though you’re going to see them quite a bit, they didn’t really film that much, which was great.

I was very protective of them as far as that goes. I made sure that whenever there were times where maybe Eric and I were filming something, my mom would have the kids and she would take home videos of them, that you’ll get to see on the show. Just so you know that they are around, but they were not always filming [with us].

Our show premieres on E! this Wednesday!! You can get this song when you preorder my album on iTunes now! Link in bio ?

To get more info on the celebrity couple and see them in action, check out Eric & Jessie on E! at 10 p.m. ET/PT on Wednesday nights. 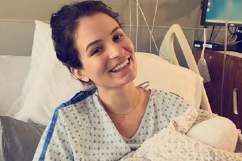