On Friday morning, the non-fan Facebook page, “Alaskan Bush People Exposed” shared a still from a recent video of Rain Brown and her brother Gabe. The photo showed the siblings goofing around, but the page’s fans were quick to criticize them both.

For starters, Gabe was slammed for his unkempt look. Many people were quick to point out that he is wearing a bathrobe and many said that he looked “high.” However, Gabe received far less attention than his younger sister.

Several Facebook users couldn’t help but comment on Rain’s tongue, which appears to have two big slits in it and looks wavy or bumpy on its underside.

“Is there some type of medical condition that presents itself through the tongue?” asked another.

“That is the tongue of a very ill individual,” added a third. And the comments didn’t stop there.

This isn’t the first time that a photo of Rain sticking her tongue out has caused people to question “what’s wrong” with her. The photo below, which was posted by Rain last month, also caused a stir.

Despite popular belief Gabe isn't dead he just dim wittily swam with his phone and then lost it lol he's hanging in there as we all are, love you guys?? thank you all for the support prayers and love it truly does help❤️ God bless all of you

Any time that Rain posts a picture with her tongue out, people comment about how different it looks and many wonder if she is ill or if she has some kind of disease. It appears as though Rain Brown may have “fissured tongue,” which is not caused by an illness of any kind and isn’t all that uncommon.

“Fissured tongue is a condition frequently seen in the general population that is characterized by grooves that vary in depth and are noted along the dorsal and lateral aspects of the tongue,” Medscape explains.

Rain has not confirmed whether or not she has “fissured tongue.”

Rain and her family have stopped filming Alaskan Bush People as her mom, Ami Brown, is battling lung cancer. Discovery has not announced when the Browns will start filming again or if/when a new season of the show will air. 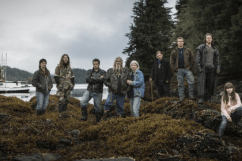