When Cortney Marie Reardanz’s friends showed her sexy modeling photos of her overseas boyfriend Antonio Millon, Cortney became nervous. But, she decided to fly to meet her online love in person and it was a bumpy ride to say the least. When Cortney arrived, she didn’t feel that Antonio made the best impression. Fortunately, after spending the night in his apartment, the two felt more comfortable together. But, there were still red flags for Cortney, as she noticed he had a lot of “female friends”. She also was not a fan of him checking out other women in front of her.

With all of these things adding up, is the couple still together?

It looks like they are at least friends, as just a couple days ago, Cortney posted a Snapchat photo of the two with a long message about “marrying your best friend.” Also just a couple weeks ago, Antonio posted a photo of him with Cortney and the caption stated:

It is a pleasure to read your positive comments everyday! Beside me, you can see a beautiful, sweet, silly, and smart girl who has my back and makes me feel happy. I can’t say more about it because you should keep watching the show. Thanks a lot! Our best wishes to everyone!

According to Empty Lighthouse, this is not the first time that Cortney has been in an online relationship. In fact, she was previously catfished by someone online.

While the couple could very well still be together, there are also a ton of photos of the two traveling separately in recent months. And, apparently, Cortney said:

I have done a lot of traveling during the past year. I have met amazing people all over the world, but you are one of the sweetest loving souls I have met. Beautiful inside and out. The love you have for life, your family, strangers, and animals is inspirational. We can all learn from you. I am blessed to have met you. Don’t worry about the hate or judgement of others. You are amazing. just another f–kboy” (she calls him that a lot).

Empty Lighthouse reported that Antonio’s response was this:

Thanks darling! You’re lovely! I’m glad I had the opportunity to meet you and it’s not the final…

There have also been rumors that Antonio is or was married. Reality Blurb has photos of Antonio in a wedding shoot with a woman and there are also pics of Antonio with a ring on his wedding finger.

Whatever the case, Antonio is clearly not living in Florida with Cortney and she does not appear to be living with him. If the two are carrying on a romantic relationship together, then it is still long distance. 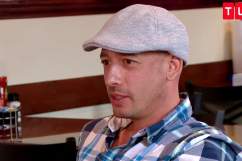 Read More
Reality TV, TV
Cortney Marie Reardanz and her boyfriend Antonio Millon are part of the cast of 90 Day Fiance: Before the 90 Days. Are they still together?