In June 2002, Elizabeth Smart was a 14-year-old girl. She was kidnapped from her bedroom in Salt Lake City, Utah on June 2, 2002 by a religious fanatic named Brian David Mitchell. Mitchell brought Smart to a camp near her home, where he and his wife, Wanda Barzee, held her captive. Smart endured being starved, drugged, raped and being subjected to bizarre religious ceremonies by her captors. Smart was held for 9 months before being rescued and brought home to her parents.

Elizabeth Smart herself narrates Lifetime’s newest movie on-screen. She also worked as a producer on the film. Smart worked on this film in order to explore how she survived and confront the misconceptions and truths about her kidnapping.

Executive producer credits for “I Am Elizabeth Smart” go to Steve Michaels, Jonathan Koch and Joan Harrison, all of Asylum entertainment, Allison Berkeley and Joseph Freed of Marwar Junction Productions and Barbara Lieberman and Tom Patricia. Sarah Walker directed the film from a teleplay written by Tory Walker.

Read on to meet the cast of Lifetime’s new movie.

Alana Boden stars as Elizabeth Smart. Boden is an English actor best known for her role as Elaine Wiltshire in the Canadian television series Ride. She has been featured in other shows like Mr. Selfridge and Wolfblood and was featured in a 2014 British thriller film titled Spiritual Contact: The Movie. I Am Elizabeth Smart will be Boden’s biggest role yet.

Skeet Ulrich stars as Elizabeth Smart’s kidnapper Brian David Mitchell. The actor has played in crime television and movies before, so he is not a random choice to play Mitchell. Ulrich, born Bryan Ray Trout in 1970 in Virgina, is known for his work in the 1997 film As Good as It Gets and the 1996 film Scream. He is a former student at New York University where he studied acting after studying marine biology at the University of North Carolina. Ulrich’s stepfather D.K. Ulrich and uncle Ricky Rudd are both Nascar Drivers.

Deirdre Lovejoy stars as Wanda Barzee, Mitchell’s husband and Elizabeth’s second kidnapper. Lovejoy is no stranger to crime television and films, with the majority of her credited roles being in that arena. The actress was born in Texas and is known for her work on television in The Wire, The Blacklist and Bones. She also had roles in shows like Law & Order: Criminal Intent, Medium and Lie to Me. Lovejoy graduated from the theater department at the University of Evansville in Evansville, Indiana. 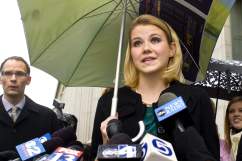