From 1981 through 1988, Lauer was married to Alspaugh, a producer and screenwriter perhaps best known for her work on Leeza Gibbons’ show, Leeza. Alspaugh and Lauer dated for quite some time before deciding to tie the knot. The two never had children together, despite their seven year union.

Alspaugh has not released a statement of any kind following Lauer’s firing.

1. She Worked as a Screenwriter & Has Been Nominated for a Few Daytime Emmys

Back in 1994, Alspaugh was nominated for Outstanding Talk Show for her work on Vicki!

She also earned recognition for her work on The Bradshaw Difference (1996) and Caryl & Marilyn: Real Friends (1996). For both shows, Alspaugh served as executive producer.

According to her website, “she has been honored with the United Press International Award, the Associated Press Award, the Gabriel Award, the Genesis Award, as well as having been named one of the Hollywood Reporters ‘Women to Watch.'”

2. She Is a Published Author

In 2003, Asplaugh released her first book, Not Your Mother’s Midlife: A Ten-Step Guide to Fearless Aging. The book was co-authored with Marilyn Kentz, “a successful ghostwriter, a facilitator of several writing and women’s groups, a parent educator and an artist,” according to her website.

You can read what Not Your Mother’s Midlife: A Ten-Step Guide to Fearless Aging is about in the paragraph below.

“Aging ain’t what it used to be. For one thing, people are staying younger longer. For another, countless baby boomers are rising up against the notion that with age comes worthlessness.In fact, Not Your Mother’s Mid-Life: A Ten-Step Guide to Fearless Aging is more than a book; it’s a movement. This gloriously gutsy volume challenges society’s worn-out perceptions that women become less valuable as they age. Instead, authors Nancy Alspaugh and Marilyn Kentz celebrate the fact that today’s women can be more powerful, more efficient, more capable, and even more desirable as they age.In Not Your Mother’s Mid-Life, readers will find 10 practical recommendations to help women face middle age with confidence and a positive attitude. From chapters like Let Go of What’s Not Working, Shore Up Spiritually, and Find a New Passion, Not Your Mother’s Mid-Life contains personal growth exercises, humorous and poignant stories, and questions and visualizations to inspire new ways of thinking.Not Your Mother’s Mid-Life takes the crisis out of mid-life, replacing it with passion, fearlessness, and unlimited possibilities.”

Two years later, Asplaugh released the book Fearless Women: Midlife Journeys, another collaboration with Kentz. A blurb about the book is below.

“Ask some women their age, and they’ll demur. Ask others, like Joni Mitchell or Cybill Shepherd, and they’ll take up a sword. In this inspirational book, 50 women ranging in age from their 40s to their 60s-including movie and television personalities, musicians, and Olympic athletes-are presented in stunning photographs holding a sword to symbolize their passionate and courageous approach to aging. Their stories are told alongside the pictures, capturing the experiences of the 38 million women of the Baby Boom generation who are challenging the age barrier and living the second half of their lives to the fullest.”

Nancy Alspaugh and Marilyn Kentz’s two books are the foundation of something that they call the Fearless Aging movement. It is a way for women to deal with aging and celebrate the later years of their lives.

Years after her split from Lauer, Alspaugh met and married FOX executive H. Read Jackson. He was a former producer for 60 Minutes and ABC World News Tonight before becoming an executive at Fox Sports Net.

He was diagnosed with cancer later in life and had been in assisted living before he died on January 25, 2016.

“Jackson graduated from Hobart College in 1966 and served in the U.S. Navy. He worked as an account executive with the Benton & Bowles advertising agency in New York and was a programming vice president and executive producer for a public-TV station in Philadelphia. He left television in 2011 and launched a company that developed mobile apps,” Yahoo! News reported at the time of his passing.

The following video was posted after Jackson’s death.

4.  Her Only Son Has Autism & She Has Dedicated Much of Her Life to Autism Awareness

The hardest question? When does dad come home!

Alspaugh and Jackson adopted their son, Wyatt. Wyatt was diagnosed with autism when he was 3 years old (he is now a teenager).

“Having grown up with a younger brother with Down Syndrome, Alspaugh-Jackson was aware of the challenges families face raising special needs children. She feels it was no accident that she was given a special needs child to raise herself,” reads her website in part.

A short time after Wyatt’s diagnosis, Alspaugh found her calling. She began helping families find resources and treatment to help see them through the challenges that an autism diagnosis brings.

“She became the executive director of ACT Today! (Autism Care and Treatment Today!), a national non-profit organization whose mission is to provide resources and fund grants for children whose families cannot afford the necessary tools their child needs to reach their full potential. In the last five years, she has raised more than $5 million dollars for autism care and treatment, and launched the first national campaign for military children with autism, ACT Today! for Military Families,” according to her website.

5. She Challenged Lauer to Take on the Autism Act of Love Challenge in 2014

Alspaugh has spent a great deal of time as a motivational speaker. In 2012 and 2013, she made a handful of appearances at schools and conventions, raising awareness for autism.

In addition, Alspaugh has appeared on the Autism Live YouTube channel. In 2014, she took on the
#AutismActofLove challenge in honor of Wyatt. 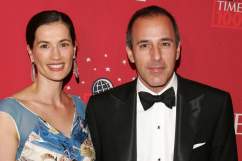