Rita Ora is the host of the 2017 MTV Europe Music Awards, also known as the EMAs. Ora is also a performer, singing the songs “Anywhere”, “Your Song”, and “Lonely Together.” For the red carpet arrivals tonight, Ora actually walked the carpet in a towel and bath robe, along with white underwear. She was also dripping with diamonds around her neck, fingers and on her ears. The EMAs are the sixth annual event and the top nominees are Taylor Swift and Shawn Mendes. Mendes, who is a performer at the event, has five nominations, while Swift has a total of six. Mendes is the winner this year of the Biggest Fans Award and the Best Song Award. The legendary U2 also hits the stage and they are the recipients of this year’s Global Icon Award. Bruce Gillmer, Head of Music and Music Talent for Global Entertainment Group and Viacom, says that they are being honored for their “contributions to music, pop culture and social issues around the world”. Gillmer also said, “For over four decades and counting, they’ve entertained, influenced, and inspired fans around the globe and we’re thrilled to announce that they are this year’s Global Icon.”

Another performer from the show is former One Direction star Liam Payne, who is putting on a performance of his song “Strip That Down.” For his set, Payne incorporated some well-orchestrated choreography as well. Camila Cabello delivers a sexy performance of her single “Havana” for the EMAs and she was also the winner of the Best Pop Award. Check out some of Cabello’s performance in the below Facebook post.

Demi Lovato took the stage today and gave a performance of her songs “Sorry Not Sorry” and “Tell Me You Love Me”. But prior to her taking the stage, she rocked the red carpet in a barely there outfit. She wore a white plaid blazer and dress pants, but no shirt or bra, with the blazer jacket wide open. Eminem and Skylar Grey are also giving it up with their song “Walk on Water” and Eminem is set to appear on Saturday Night Live in the USA next weekend. In addition to performing, Eminem also took home the 2017 MTV EMA for Best Hip Hop. Check out some clips from Eminem’s performance below.

@Eminem & @SkylarGrey killin it with "Walk On Water" @ #MTVEMA
pic.twitter.com/jr4yQOSqv2

Stormzy performed the song “Big for Your Boots”, while The Killers executed two of their songs for their act – “Run for Cover” and “The Man.” Afrojack also took the stage, along with French Montana and Swae Lee. Clean Bandit teamed up with Sean Paul, Anne-Marie, Julia Michaels and Zara Larsson for a performance of three songs – “I Miss You”, “Rockabye” and “Symphony”. Kesha delivered a performance of “Learn to Let Go”, while Travis Scott hit the stage with his song “Butterfly Effect.” David Guetta and Charlie XCX also appeared as performers with their hit “Dirty Sexy Money.” In addition to performances, several big artists and personalities appeared as presenters at the event. Natalie Dormer, Paul Pogba, Prophets of Rage, Madison Beer, Sabrina Carpenter, will.i.am, James Bay, Lana Del Rey, Jared Leto and Daya were all included in this. 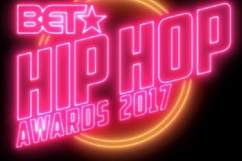