Hallmark Movies and Mysteries’ A Bramble House Christmas was filmed in Vancouver and British Columbia. The movie was filmed in July.

Here are some of the specific locations where A Bramble House Christmas was filmed.

Vancouver and BC are popular filming locations for Hallmark movies. And the summer is a popular time to film Hallmark movies. In fact, actors and crew often talk about what it takes to give a movie filmed in the summer that magical, wintry, Christmas feel. It’s not easy, but they seem to hit it out of the park every time.

Here are some photos from the Bonson Road filming location in Pitt Meadows. According to one fan, this was filmed in the same house that was used for Hallmark’s All for Love:

And here are is a photo from the Maple Ridge filming:

The author of “A Bramble House Christmas,” upon which the movie is based, also shared photos from her visit to the set.

And here’s the author of the book, on the set:

Want to see more pictures from the filming? Here’s a blog from a friend of the author who wrote the book, A Bramble House Christmas. She attended the filming in Vancouver and shared some photos on her blog.

What did you think of the movie? Do you want to visit the locations where it was filmed? Let us know in the comments below. 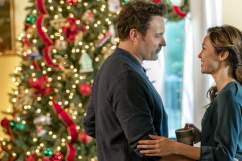