A former Disney Channel star is being accused by cops in California of committing a series of armed robberies. TMZ was the first to report that Adam Hicks, 25, is being accused, along with his girlfriend, Danni Tamburro, 23, of mugging multiple people with a gun. The pair are accused of making off with “money, cellphones and other items.” The gossip site says that at least two of the victims are women in their 70’s. Hicks was arrested on January 24 at a home by a SWAT team. The alleged crimes occurred in the San Fernando Valley area.

The Hollywood Reporter says that Hicks is being held on a bail of $350,000 and will appear in court on January 26.

Hicks, a native of Las Vegas, is perhaps best known for his role on the Disney XD show Zeke and Luther which ran from 200 until 2012.

TMZ reports that Hicks was arrested twice in 2017 both times in Los Angeles. In July, Hicks was accused of shooting a gun and in July 2017, Hicks faced a battery charge. TMZ says both charges were thrown out due to lack of evidence.

A press release from the Burbank Police Department reads, “A 52-year-old man was walking in the area of Burbank Boulevard and Griffith Park Drive when he was approached by a male armed with a handgun. The suspect pointed the handgun at the victim and demanded his wallet. Fearing for his life, the victim ran away and was able to escape to safety.” The alleged crimes took place just after 5 a.m. on the morning of January 24. The suspects were driving a black Kia. While cops were responding to the initial robbery, “several” more similar crimes were reported.

2. Hicks’ Girlfriend Has Been Appearing in Commercials Since She Was an Infant

According to posts on both of their social media pages, Hicks is dating aspiring actor Danni Tamburro. One post on Tamburro’s Instagram page indicates the couple has been together since 2016. On her official website, Tamburro says that she has appeared in movies with Tom Arnold and former Cheers star John Ratzenberger. The latter is referred to as a “touching holiday movie.” The bio says Tamburro has been appearing in commercials since she was an infant and also had a small part in Showtime’s Shameless. Outside of acting, Tamburro volunteers at the Children’s Hospital in Los Angeles where she works with terminally ill infants. Tamburro says she writes her own music and “is devoted to her puppy.”

The Los Angeles Sheriff’s Department says that Tamburro is in custody as of January 24:

The Burbank Police Department wrote on Facebook on January 24, “The Burbank Police S.W.A.T. Team activity in the 1800 block of North Niagara Street has concluded. The police investigation is still ongoing and connected to several armed street robberies that occurred early this morning in the City of Burbank.” A press release from the department says that officers believe Tamburro drove the getaway car.

Hicks has two movies coming out in 2018, the movie Windsor, about a group of high school seniors seeking to escape their small town. The independent film is already available to view on YouTube. The other is Shifting Gears, which stars John Ratzenberger and C. Thomas Howell. The tagline describes the film as, “We Bought A Zoo meets Days of Thunder on a dirt track!.” Prior to those movies, Ricks had been appearing in the Hulu horror series Freakish as the character Diesel. The second season just began airing in October 2017.

4. Hicks Says He’s the CEO of the Family & Money Team

On his Facebook page, Hicks says that is the CEO of the Family and Money Team. Many of Hicks’ online profiles refer to him as a rapper as well as an actor. Hicks makes reference to the group on his Instagram page saying, “F.A.M till the end.” His music career goes back to 2009 when he recorded a cover of MC Hammer song, “U Can’t Touch This” with his Zeke and Luther star Daniel Curtis Lee.

Hicks’ latest tweet was sent on December 14, it simply reads, “May 1, 2018 #Blessed.” He didn’t elaborate on the tweet with many in the comments suggesting he was referring to a sequel to his 2011 movie, Lemonade Mouth. In his Twitter bio, Hicks says he’s “making moves one step at a time.” 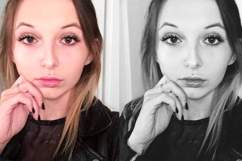 Read More
Breaking News, Celebrities
A former Disney Channel star is being accused by cops in California of committing a series of armed robberies.