Britney Spears and her boyfriend, Sam Asghari, are vacationing in Hawaii this week after Spears wrapped her residency at Planet Hollywood’s Axis Theater in Las Vegas. Although some sites have reported that Asghari didn’t make the trip with Spears, he has posted some videos to his Instagram story that appear to be from the same vacation spot.

Spears has been enjoying the sun and the sand, sharing some posts from the beach with two sons, Sean Preston, 12, and Jayden James, 11.

On January 11, several news outlets posted photos of Spears wearing what appears to be a diamond ring on her left hand, sparking rumors of an engagement. Neither Spears nor Asghari have addressed those rumors.

1. Spears Told Asghari She Loved Him in an Instagram Video Posted on January 1

Happy New Year from me and my partner in crime ???@britneyspears

On New Year’s Day, Asghari posted a video of him and Spears, his “partner in crime,” on Instagram. The couple made headlines for their sheer adorableness — and for proving just how serious their romance is: Spears told Asghari “I love you” publicly, for the first time ever.

In the video, the two are seen sitting together, having some fun with the app’s filters, when they decided the share their post with the world. They both say “hello” to start the video, which you can watch above.

Keep in mind, the video must have been recorded earlier than it was posted, as Spears wrapped her residency on New Year’s Eve.

“Are you excited about your last couple shows?” Asghari asks Spears in a high-pitched voice thanks to the filter’s voice-changer.

“You look beautiful,” Asghari tells her.

“Thank you, and I love you,” Spears says cutely, kissing her man on the cheek.

Earlier that same day, Asghari shared another video, this one of Spears from her final show at Planet Hollywood.

“Four years of legacy, four years of greatness, a change in entertainment for the better! Extremely proud of my baby for kicking ass again tonight, but this time to end #pieceofme in Vegas after four years of residency. What a night. Happy New Year,” Asghari captioned the video, calling his girlfriend the “GOAT” (Greatest Of All Time).

Spears split from her fiance, Jason Trawick, in 2013, after four years of dating. The pop star went on to date David Lucado and Charlie Ebersol, before officially becoming single in 2015. In August 2016, she released her latest album, Glory, and had been busy promoting it.

Following the release of the album’s first single, “Make Me…” featuring G-Eazy, Spears released her second single, “Slumber Party.” It was November 18, 2016, when Spears released the hit single and its corresponding music video — that features Asghari. And this brings us to how the two met.

Asghari works as a fitness model and an actor. He was hired by Spears’ team to be the male lead in the “Slumber Party” music video, which also featured Tinashe.

“I think we were at, um … we were shooting. We were doing the scene where I was doing the walk scene through the hall to go through the door to go to the bedroom, and we were sitting there and waiting and waiting together for like 20 minutes at a time. We were having to be literally stuck there together, so we were basically forced to talk to each other,” Spears said on CBS Radio’s Fast in the Morning With Nathan Fast in January 2017.

“It was one of those things that we were having a conversation to get through the experience, you know? I kept his number, and it was so weird — it was like five months later, and I found his number in my bag. I was like, ‘He is really cute. This guy is really cute.’ So then I called him, and ever since then, he is just a really fun, funny person,” Spears added.

But this isn’t the first time you’ve seen Asghari. He was in Fifth Harmony’s “Work From Home” music video, playing the role of a super hot construction worker. You can watch both videos below.

3. They Bonded Over Sushi

Exploring ?? with my lioness

As Spears and Asghari got to talking, they realized that they had a few things in common, such as their mutual love of sushi.

“He has no idea … I mean, he knows my name but he doesn’t really know me as a person. He’s like, ‘What is this girl like?’ and I have no idea who the hell he is, you know? We started talking about sushi and started talking about things we like and like we should go to sushi one day,” Spears told Nathan Fast.

Although it’s unclear if the couple ever went on that sushi date, they have been on several dates over the past year. Not only has Asghari spent loads of time with Spears in Vegas, but he’s also travelled the world with her, even getting to explore Japan back in June.

Spears and Asghari have made several public appearances together, but they still haven’t walked a red carpet at a couple.

4. Asghari Is 13 Years Younger Than Spears

Though they have many things in common, they also differ in many areas as well. For starters, Asghari is a full 13 years younger than his stunning girlfriend. Asghari was born in 1994 (Spears was born in 1981) in Iran. In 2007, he emigrated to the United States with his family.

Asghari lives in California, but has spent a great deal of time in Las Vegas with Spears. Although her residency recently ended, rumor has it that she inked a deal with another hotel — the Monte Carlo — and will be starting a new show in Vegas in 2019.

“They made the offer and she just couldn’t refuse. She loves Vegas,” a source told Us Weekly. It is possible that Asghari will either be locating to Vegas with Spears at that time, especially if the two are engaged or end up getting engaged in the coming 12 months.

5. Spears Has Been Married Twice Before

So proud of this beautiful woman ❤️ #anothergreatshow

Spears is no stranger to being a wife. The “Toxic” singer married her childhood friend, Jason Allen Alexander in 2004 while in Las Vegas as a sort of joke. The two were celebrating New Year’s together and decided to tie the knot. Spears and Alexander went to A Little White Wedding Chapel dressed in their everyday clothes (Spears had on a baseball cap and a crop top), where they exchanged vows.

Fifty-five hours later, however, their marriage was annulled.

Later that year, Spears hit it off with one of her back-up dancers, Kevin Federline. The couple had a whirlwind romance that was all documented on their short-lived reality series, Chaotic. The show filmed the couple right through their wedding day (October 6, 2004), which was held at Spears’ house in Studio City and was a complete surprise to their family and friends, all of whom thought they were going to the couple’s engagement party.

Spears and Federline welcomed their first son, Sean Preston, on September 15, 2005. A few months later, Spears found out that she had gotten pregnant again. Jayden James was born on September 12, 2006.

Asghari has never previously been married, nor does he have any children of his own. Many people have spotted another female on his Instagram page, but there’s no love connection there. Asghari is extremely close with his sister, Faye. 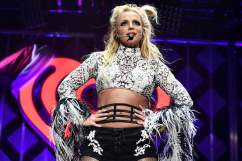 WATCH: Britney Spears’ Security Tackles Man Who Got on Stage