The 2018 Grammy Awards air tonight at 7:30 p.m. ET/4:30 p.m. PT on the CBS network and James Corben returns as host. Jay-Z leads the pack with 8 nominations and Kendrick Lamar follows just behind him with 7. This year, the Grammys are being held in New York City, at Madison Square Garden, and the awards ceremony will be filled with unexpected collaborations, tributes and legends. Get to know more about each of the performances that are listed as part of tonight’s lineup below.

Tonight, Lady Gaga is up for two awards – Best Pop Vocal Album and Best Pop Solo Performance. In December 2017, Gaga announced on Twitter that she snagged herself a residency in Las Vegas at MGM’s Park Theater, as reported by Bustle. FOX News reports that Gaga’s performance tonight will be of a song off of her album “Joanne.”

I am so looking forward to the Grammy’s #someofthebestnightsofmylife

Pink is known for her acrobatic and amazing performances, so fans should definitely be looking forward to tonight. In fact, her song “What About Us,” has gotten her nominated for Best Pop Solo Performance tonight. According to Romper, fans are hoping the star will bring her daughter Willow to the awards show this year.

This is Childish Gambino’s first time performing at the Grammy awards and he is also a nominee. Actor Donald Glover, who is also known as Childish Gambino, is nominated for 5 awards tonight – Best Urban Contemporary Album, Record of the Year, Album of the Year, Best R&B Song, and Best Traditional R&B Performance.

On our way to @MusiCares to honor our heroes Fleetwood Mac.

Country group Little Big Town is up for two awards tonight and they are also taking the stage to perform. The group is made up of Karen Fairchild, Kimberly Schlapman, Jimi Westbrook, and Phillip Sweet and they are up for Best Country Duo/Group Performance and Best Country Album.

Patti LuPone is performing “Don’t Cry for Me Argentina” from “Evita” as part of a Broadway tribute to Andrew Lloyd Webber and Leonard Bernstein. E! reports that LuPone is a two-time Grammy winner and Broadway icon, who, in 1981, took on the lead role of “Evita”. Ben Platt will also participate in this tribute, incorporating the classic from “West Side Story.” Platt currently up for Best Musical Theater Album for “Dear Evan Hansen.”

Bruno Mars and Cardi B

It’s been a while since Rihanna performed at an awards show and tonight, she takes the stage with DJ Khaled and Bryson Tiller to perform the song “Wild Thoughts”. Rihanna has been away from awards show stages for a while, so fans are surely excited for her performance.

??#Repost @recordingacademy ・・・ There's a little something for everyone among the 60th #GRAMMYs Song Of The Year nominees! This elite category includes two #pop hits ("Issues" and "That's What I Like"), straight hip-hop (#JayZ's "4:44"), an infectious #Latin remix ("Despacito"), and a #hiphop collaboration with an #inspirational message ("1-800-273-8255"). Who do you think takes home the GRAMMY? Let us know ⬇️

These two artists are performing their hit song “Despacito” for the Grammys. According to FOX News, Zuleyka Rivera, who appeared in the “Despacito” music video, will also take the stage. In anticipation of tonight’s show, Fonsi told Entertainment Tonight, “I’m a little nervous, I’m not gonna lie. This is really big. Not only for me, but for Latin music in general, to be able to sing a song in Spanish for the big show. I’m really proud to be here.”

Together, Logic, Khalid and Alessia Cara are performing their suicide prevention song “1-800-273-8255”. The phone number is the actual number of the National Suicide Prevention Lifeline. This hit is nominated for Song of the Year and the performance will include suicide attempt survivors and suicide loss survivors, as reported by the Recording Academy.

https://www.instagram.com/p/Beds22VjlWJ/
In addition to performing tonight, SZA is also nominated in 5 categories – Best New Artist, Best R&B Song, Best Rap/Sung Collaboration, Best Urban Contemporary Album, and Best R&B Performance. In an interview with People, SZA said that her music is based on her life, explaining that, “[My music] is definitely rooted in my experiences. My music is touching people in whatever spaces they need to be touched in. I’m just making sure I’m staying true to whatever really happened to me or how I really feel. That’s the only way I can get rid of it as a person.”

i’m so honored! a WILD dream come true, the grammys have invited me to perform and i couldn't be more thrilled and humbled ❤️

Kesha’s song “Praying” was reportedly inspired by her battle with Dr. Luke and tonight, she will be joined by artists Andra Day, Camila Cabello, Julia Michaels and the legendary Cyndi Lauper for a special performance. Kesha’s song is nominated at this year’s Grammy Awards and she recently wrote on her Instagram account that, “When i wrote praying, with Ben Abraham and Ryan Lewis, I just felt as if I had gotten a huge weight off of my shoulders. It felt like an emotional raw victory for myself, one step closer to healing. I never could have known what would’ve happened these past few years. I just want to say that i needed this song in a very real way, I’m so proud and nervous and overwhelmed to be performing it at the Grammys on Sunday, and if you need it i hope this song finds you.”

One of the most unique aspects of the #GRAMMYs is the unprecedented blend of performances spanning so many different genres of #music! We're counting down the minutes until we get to see @kendricklamar, @brunomars, @sza, @childishgambino, @alessiasmusic, @thegr8khalid, and @luisfonsi perform under the spotlight of Music's Biggest Night @thegarden!

Kendrick Lamar, one of tonight’s lead nominees, is reportedly kicking of the show as the opening performer. He is said to be getting help from Dave Chapelle and U2, according to E! As for U2’s performance, their set was pre-taped on Friday night on a barge in the middle of the Hudson River. A source told Variety that, “The pre-taped performance will play, and then the show will cut to the band onstage with Kendrick Lamar at Madison Square Garden, presumably performing “Get Out of Your Own Way,” the song from U2’s latest album “Songs of Experience” that featured Lamar.”

https://www.instagram.com/p/BebaXyEhQ0v/
Tonight, Elton John takes the stage with Miley Cyrus for an unexpected collaboration. They will be performing a couple of Sir Elton’s legendary hits and he revealed to Entertainment Tonight that, “I love Miley. I just asked her if she’d do it with me, and she said, ‘Yes.’ She’s going to be on the TV special as well.” This performance comes two days before his televised “Elton John: I’m Still Standing – A GRAMMY Salute” tribute concert.

https://www.instagram.com/p/BeTg7qMlUbY/
Sam Smith is not up for a Grammy award tonight, but he is set to take the stage as a performer. We are assuming that Smith will perform his latest hit song “Too Good at Goodbyes”, but he could also be singing his song “Pray”. According to Billboard, Smith is currently gearing up for a tour in Australia and New Zealand.

Got off a long flight to find out “I Could Use A Love Song” is nominated for a freaking Grammy! I can’t process that HERO has had this presence both years now, so I’m incredibly thankful & shocked. Congratulations to all of my friends for their nominations as well! ?✨?

These country artists are getting together to pay tribute to the victims of the 2017 Las Vegas shooting from the Harvest 91 Festival. All three of these artists performed at the festival where the shooting took place on October 2017, as reported by The Guardian. In the past, Morris said she didn’t know how to help or properly speak up, but, according to The Guardian, Morris said, “I feel like in general over the last year or so, everything from the shootings to the Me Too movement means a lot of country artists aren’t feeling as scared to have an opinion publicly about things that are important to them.”

According to Billboard, Sting was one of the later additions to the Grammys lineup of performers tonight. He is not a nominee, but he is a legend, to say the least. Originally, there were rumors he would participate in a pre-show concert, but he was then reported as a full-blown show performer.

FOX News reports that Chuck Berry and Fats Domino will be honored tonight with a duet performance from rocker Gary Clark Jr. and Jon Batiste, from the band Stay Human.

Emmylou is honored to receive @RecordingAcad Lifetime Achievement Award. Tune in on January 28th to catch the show: https://t.co/OW1US9A3Zf

Just last night, Chris Stapleton appeared on Saturday Night Live as the musical guest, while Will Ferrell hosted, and now he is taking the stage at the Grammys. Stapleton is up for three awards tonight. Meanwhile, Harris is picking up her 14th award, as this year’s Lifetime Achievement GRAMMY Award recipient, according to Entertainment Tonight.

15 straight hours clocked in, but we knocked out the whole music video for “The Middle” with @Target , and let me tell you… it’s mindblowing. I can’t WAIT for y’all to see its premiere Sunday night during the #GRAMMYs ! #MoreMusic ???

Maren Morris is taking the stage twice tonight. With Zedd and Grey, she will perform the song “The Middle”, and according to People, this is the debut performance of the single. When dishing to People on the song, Zedd revealed, “We worked really hard on this record to get it just right and it feels great to be able to finally share it with everyone. It was super fun working with Maren because she is clearly an amazing singer and very talented musician. And, I always love working with Grey because we push ourselves to make the best music possible and the end result is incredible.” 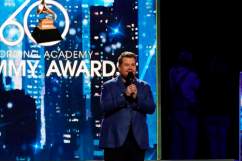 Here's a quick look at the #performers for tonight's 60th #GRAMMYs! The only question left to answer is…what song will they #sing!? Sound off in the comments with your best guess! ? #GRAMMYs